Structural geology student Ad Byerly and his assistant Mike Kedenberg traveled all over remote parts of Idaho to measure the rock structures within the main body of igneous rock called the Idaho Batholith. This batholith takes up a huge percentage of the state of Idaho. They collected data at sites where other researchers already had determined the age of the rocks by measuring them in a different way, called geochronology. 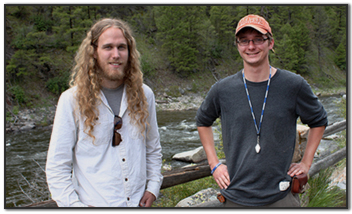 Ad Byerly and Mike Kedenberg along the Salmon River near Stanley, Idaho

Ad and Mike took samples of rocks that they found on the surface at each site. To find out how the different minerals within the rocks were aligned, Ad applied different analytical methods to the samples, both in the field and back at the lab in the University of Wisconsin.

intervews in Idaho and at the UW lab ...

Ad's study is part of the IDOR project effort headed by Principal Investigator Basil Tikoff, to look at the structural geology—the folds, faults, and shear zones in the area—to see how this region has been deformed over time. Ad's study also draws on the work of IDOR Principal Investigator Jeff Vervoort and former graduate student Rich Gaschnig, both from Washington State University. They also collected samples throughout the Idaho Batholith and in Eastern Oregon, where the rocks were exposed on the surface of the Earth. Jeff and Rich were looking at the geochronology and geochemistry of their samples—how old the granitic rocks are and where the rocks originated within the Earth.