To help researchers learn more about the subsurface structure of the Earth in Eastern Oregon and Western Idaho, a group of college students took gravity measurements at regular intervals across this region, about three readings per mile. They used instruments called gravimiters, or gravity meters, to take these measurements. At each site along the transect, they also recorded the exact GPS location. 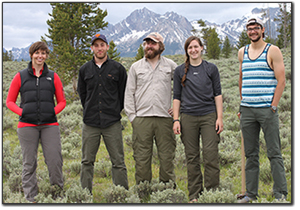 The gravity team followed a transect that was set up by another group from the IDOR project that had buried seismometers and set off controlled explosions to measure how fast seismic waves travelled through the Earth. By following the same transect, researchers could compare and contrast the data gathered by each group.

Gravity studies measure how much gravity pulls in a particular location todefine the rock density underneath the Earth. Gravity changes depending on whether you go up or down on the surface of the Earth. For example, gravimeters are so sensitive that if you go up just one foot in elevation, they'll give you a different reading. Different rock types, such as a sedimentary rock, pull a lot less on the gravimeter than a more dense type, such as a rock that is part of the Earth's mantle and has come up to the surface. For this reason, gravity variations can actually tell you a lot about what's below you. By analyzing the gravity readings, researchers are learning more about the structure or arrangement of rocks beneath the subsurface of the Earth along the IDOR transect. 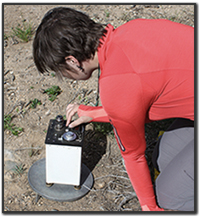 Erica Larsen uses a gravimeter to take
a gravity measurement
The students on the gravity team were Joey Lane, Will Montz, Erica Larsen, and Austin Cary, all from the University of Wisconsin, Madison. They were working under the direction of PI Basil Tikoff. Besides helping on the gravity team, Maureen Kahn (Carleton College, Northfield, Minnesota) also assisted with an exhumation study in the area. In the exhumation study, researchers are looking at when the rocks cooled through certain temperatures in the Earth's crust. By using those temperatures, they can see what parts came up to the surface at what time, relative to each other.

video stories captured at a base camp and along IDOR transect...

LaCoste and Romberg G-509 Gravimeter Manual
This downloadable PDF is the 6-page manual for one of the two gravimeters used by the IDOR gravity team to collect gravity data.