SPREE stands for Superior Province Rifting EarthScope Experiments. Principal Investigator (PI) Dr. Suzan van der Lee and other researchers, including students, are studying a giant gravity anomaly in Wisconsin, Minnesota, and Ontario (Canada). A gravity anomaly means that the gravity in that area is stronger than you would expect. This unexpected difference makes everything slightly heavier in that part of the region. Dr. van der Lee explains, "Not so that people would notice it when they weigh themselves because it's very small, but you can measure it scientifically with very sensitive instruments." 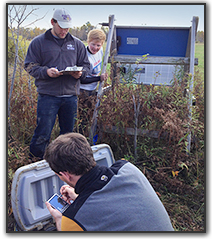 photo by Ben Rice, Northwestern Univ.
The Midwest is not very seismically active today. One billion years ago, the situation was different. In the Superior Province, hot, liquid magma rose towards the Earth's surface and cooled into basaltic rock. This volcanic activity caused an ocean to start to form by splitting the region apart and creating a rift. Later, the rifting stopped, and the process was reversed so that no ocean exists today.

Now the SPREE scientists are trying to discover why the Earth tried to split Minnesota and Wisconsin apart to form an ocean and why this rifting failed or stopped. The basaltic rocks that provide evidence for the rifting are now covered up by sediment. By using seismometers to look beneath these sediments, researchers can start to image the structure beneath the Earth's surface in that region. They can then figure out the deep forces that were interacting to cause the placement of basaltic rocks near the surface. Basaltic rocks are denser and have more iron in them than other rocks in the area. Because the Earth's gravitational pull is stronger above such dense rocks than above softer rocks more typical of the area, gravity measurements also provide evidence of the rifting process.