Development of Spatial Thinking in Field and Structural Geology Courses 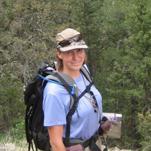 Kim Hannula, Fort Lewis College
Spatial thinking skills are a fundamental part of the competencies expected from Geoscience majors, and field experiences are thought to play a critical role in developing spatial thinking skills. This study examines the development of penetrative thinking and perceptions of horizontality in two courses: a sophomore-level field course, and a junior-level structural geology course.

Improvement in the GBCT was nearly equal in the field course and in structural geology. Furthermore, the post-test scores for the sophomore course were statistically similar to the pre-test scores for structural geology (p=0.73). This suggests that the students' penetrative thinking skills improved in steps through the sequence of courses. Engaging students in spatially intense field work early in their geoscience major prepares them to continue improving their spatial thinking through the rest of the major, and prepares them for the spatial thinking demanded of professional geoscientists.