This page was developed after the author conducted an impromptu session on Google Earth at the Infusing Quantitative Literacy into Introductory Geoscience Courses Workshop at Carleton College in June 2006.

Introduction: What is Google Earth 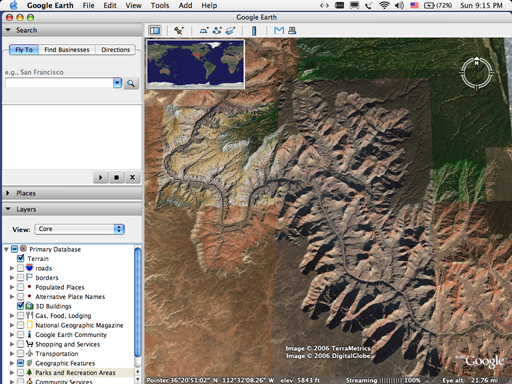 Google Earth is a virtual globe browser, arguably the most popular of those available for free on the Internet (NASA's World Wind (more info) and ESRI's upcoming ArcGIS Explorer are competitors). Virtual globes allow users to interactively display and investigate geographic data (primarily satellite and aerial images and terrain models, but also 2- and 3-D vector data such as earthquake locations, water bodies, and buildings). One of the most useful aspects of Google Earth from a geoscience education point of view is the availability of a variety of geoscience-related datasets for free on the web.

Google Earth allows users to perform some basic measurements (latitude and longitude, elevation, and size), which has led some users to consider it a variety of GIS software. Geoscience professors should be careful when making this comparison. Alan Glennon, a graduate student in geography at UCSB, wrote two essays on the pros and cons of so-called "naive" GIS (mainly focusing on applications such as Google Earth). The essays (and the comments on them by other geographers) are a good starting point if you are trying to decide whether to use a virtual globe such as Google Earth or a full-featured GIS such as ArcGIS or GRASS in the classroom. (also see Glenn Richard's Google Earth or GIS? section from the SERC Teaching with Google Earth website.

Keeping up with Google Earth: Resources

How to Obtain a Copy

Several upgrades to the Google Earth software are available. This discussion covers the standard version (available for free for personal or educational use). I do not have experience with the "plus" ($20) or "pro" ($200+) upgrades.

How to Teach with Google Earth

Getting Around in Google Earth: Common Functions

Navigation in Google Earth will be fairly intuitive for students who have grown up in an age of clicking and dragging, mouse wheels, and video games. Those who are not familiar with the interface may wish to take a look at one of the guides in the text box below. These guides describe the basics of browsing in Google Earth better than I can. Nonetheles, I will summarize some of the basics here.

Google Earth allows the user to view true-color images draped over topography for most of the globe, at varying resolutions mainly depending on the browser's "eye altitude" (height above ground). The user can navigate (pan) either by clicking and dragging part of the field of view with the mouse, by using the arrow keys, or by using a set of navigation arrows displayed in the main Google Earth viewer window. The window's viewpoint can be rotated relative to the virtual globe using a sliding or rotating control on the viewer window. The viewpoint can zoom into the globe using a slider control, the mouse wheel (PC) or control-clicking and dragging (Mac). The viewpoint can also "tilt" from a vertical position to a nearly horizontal poisition (again using a slider control).

3D models of buildings in some cities are provided with Google Earth (the "Buildings" layer), but to get the most use out of 3D models, you will have to download the SketchUp plugin. This will allow you to build and use 3D objects in Google Earth. Although 3D models are fun to play with, they are less broadly useful than other types of placemarks, so I won't go into them in detail. One clever use of 3D models in an educational context, however - an exercise on visualizing wind farms - is from Noel Jenkins' Juicy Geography site.

You and your students will probably find it useful to be able to measure features in Google Earth. Here are a few hints on how to make a couple of different measurements:

One final note about Google Earth navigation: The top panel on the left side of the Google Earth window ("Search") allows the user to search for a location. In my experience, the search function is not perfect: a search for Augustine Volcano, for example, returns no results, and a search for "Mount Rainier" after a search for "Tacoma, WA" returns local businesses with the word "Rainier" in their names. Latitude and longitude can be used instead of a place name for less ambiguous searching.

As mentioned above, one of the most appealing aspects of Google Earth is the ability to import and plot information on top of the virtual globe. Placemarks and overlays are distributed as KML (Keyhole Markup Language) or KMZ (compressed KML) files, which can be opened (by selecting Open from the File menu) in Google Earth. KML/KMZ files (I'll refer to both as KML) can be opened in either version of Google Earth.

After you open a KML file, it shows up in your Google Earth browser in two ways:

You can make your own KML files: see below.

Tools for Making Placemarks and Overlays

Examples of Good Use of Google Earth

Here are a few general suggestions for ways you might be able to incorporate Google Earth into your Earth Science classroom:

If you are intrested in creating your own placemarks but are daunted by the possibility of having to pay for GE Pro, do not fear! The free version of GE does allow you to produce placemarks and overlays (the latter is true in the Mac version; I am not sure about the Windows version). There are a number of tutorials on making placemarks (KoKae Screencasts ( This site may be offline. ) has a good one from February 23, 2006), which can be accomplished with the click of a button in all versions of Google Earth.

Looking under the hood of placemarks and overlays is not difficult - KML files are essentially text files and can be edited in a text editor. If you want to build your own placemarks and overlays, it is useful to be able to edit the KML manually. This way you can make lines of different colors, add annotation, etc. The Google KML tutorial is here . The tutorial is written for KML version 2.0; version 2.1 is currently being beta-tested. Documentation for the two versions is here: 2.0 , 2.1 .

Finally, if you want to make your Google Earth placemarks more widely usable, you can incorporate them into Google Maps. They can then be viewed directly in a Web browser using the Google Maps interface.

Visualization resources from across Teach the Earth »

Visualization resources from across Teach the Earth »