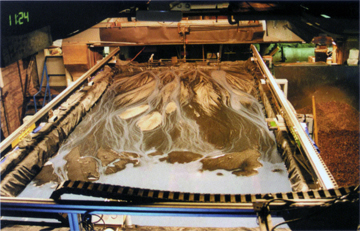 
Wouldn't it be great if you could give your students a project that allowed them to carry out a basin-scale sequence stratigraphic interpretation where all of the boundary conditions for its formation were known?


The XES Basin: an introduction

Why was it built? How does it work? What kind of data are available? What kinds of sedimentary geology problems does it help answer? What experiments have been done so far? Read a comprehensive introduction to the XES basin.

Think about this: you are trying to get your students to develop some real intuition about sequence stratigraphy and the broad-scale controls on stratigraphic architecture. You may have a project where they are correlating multiple strat columns across an incised valley fill; you may have them working with seismic lines on a continental margin; you may have them working with measured sections from across the Book Cliffs. These are all great projects, but they suffer from the geological reality that there are gaps in the data and that the boundary conditions that governed the resultant stratigraphy are essentially unknown. Sedimentary deposits in the XES Basin, on the other hand, have 100% three-dimensional 'exposure' and we know precisely how the basin architecture was created. See an example of how XES basin data can be used in a sedimentary geology project.

Alluvial fans in the XES basin