Hide
An overhead image of an XES Basin run in progress showing four interacting alluvial fans and, on the right, a 'basin' or 'ocean'. Details
Interacting Alluvial Fans in the XES Basin

The XES 06 experiment was designed to examine subsidence rate controls on alluvial fan architecture.  In most XES experiments with a single sediment feed point (i.e. axisymmetric feed) the system resembles a single alluvial fan.  In the XES 06 run the goal was to examine multiple, interacting alluvial fans and how they responded to an asymmetric change in subsidence.  In this case, sediment and water supply were fed at a rate that would maintain the shoreline in a constant position.  Base level was likewise held constant.  Subsidence rate varied in such a way as to create a longitudinal trough that was offset ~50 cm from the centerline of the basin (see image below). 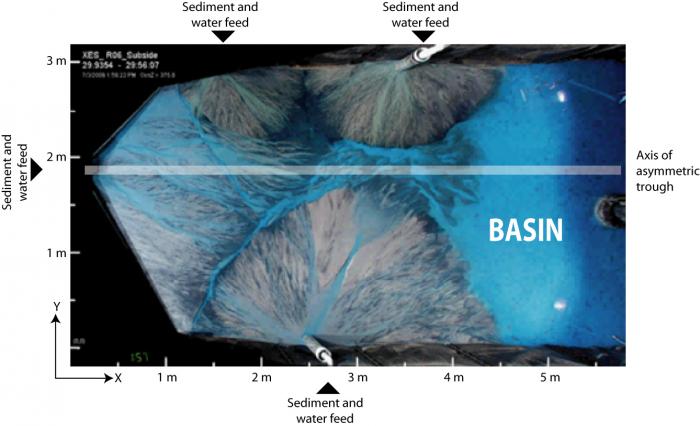 An image of the XES 06 experiment showing the position of the asymmetric subsidence trough, sediment feed points, and reference scales. Details


For a more detailed description of the subsidence geometry for different stages of the experiment, see the plots of subsidence profiles (Acrobat (PDF) PRIVATE FILE 552kB Jun27 08).

The movie provided here shows the entire XES 06 experiment, compressed into about 50 minutes of time.  The first part of the movie is the longest and shows the geomorphology (overhead views) of the experiment.  In this time lapse sequence, one second on the movie is one minute in real time.  The second part of the movie is a deposit 'fly-through' from left to right across the image above (starting at X = 0), composited from many serial slices of the deposit.  The final part of the movie shows a similar fly-through from bottom to top of the image above (starting at Y = 0).  This movie provides a unique opportunity for students to visualize how individual and multiple interacting alluvial fans respond to changes in subsidence.

This is a very large file (838 MB).  You should not expect to sit down and watch it from start to finish, but I included the entire experiment because of the gradual but dramatic changes that occur throughout.  I have found it most useful to use the slider in my movie viewer to quickly advance it to see processes highly sped-up.  It is also useful to watch selected segments.