How Does the XES Basin Work? An Introduction

Why was it built and what kinds of questions can it help to answer?


A complete description and rationale for the construction of the XES Basin can be found in the GSA Today article "Experimental Stratigraphy" (Paola et al., 2001). Also refer to the University of Minnesota's St. Anthony Falls Laboratory website and the Sedimentology Group's research page.

Four fundamental rates govern the architecture of a sedimentary basin fill: (1) sediment supply; (2) water supply; (3) base level change; and (4) tectonic subsidence. An experimental facility that effectively simulates all of these fundamental controls should provide considerable insight into how sedimentary basins evolve over geologic timescales and respond to external forcings. Rates 1 through 3 are relatively easy to control in an experiment, but it is very difficult to model tectonic subsidence, particularly if one is interested in studying a range of subsidence geometries. The XES basin uses a unique subsidence mechanism to address this last issue.

The XES Basin was built to address fundamental questions about the controls on sedimentary basin architecture and geomorphology, including:
Furthermore, by creating detailed two- and three-dimensional images of the basin deposit and architecture, it is possible to simulate subsurface fluid flow and to develop synthetic seismic images that can assist in hydrogeological and petroleum resource applications. 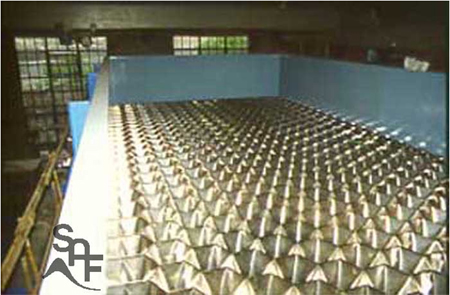 Hide
XES Basin overview, showing the tank before gravel is added and the rubber membrane is placed, image courtesy of the National Center for Earth Surface Dynamics, nced.umn.edu

How does it work?

A complete description and rationale for the construction of the XES Basin can be found in the GSA Today article "Experimental Stratigraphy" (Paola et al., 2001). The following is excerpted from this article: 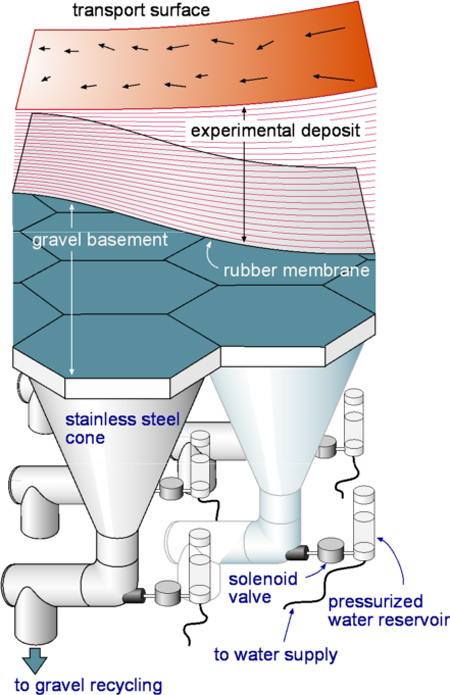 
The XES facility is a large basin (13 m x 6.5 m)...that allows the accumulation of strata through the use of a flexible subsiding substrate. The basin floor is a honeycomb of 432 independent subsidence cells (see image) through which a gravel basement is slowly extracted from below, providing space to accommodate deposition. An experiment starts with the basin filled with gravel. The top of the gravel is covered with a thin rubber membrane, which forms the base of the experimental deposit. Each subsidence cell is a hexagon forming the top of a cone that tapers down into a standard elbow pipe (see figure), where the gravel sits at the angle of repose. Subsidence is induced by firing a pulse of high-pressure water into the gravel in the elbow, knocking a small volume into an exhaust line. Each subsidence cell has its own sealed pressure tube that drives the pulses via a computer controlled solenoid valve. We have refined the pulsing so that each pulse produces ~0.12 mm of subsidence.... The system provides about 1.3 m of usable accommodation space in the basin.

Premixed sediment and water can be fed from anywhere along the perimeter of the basin, and base level is independently set by a computer-controlled head tank mounted outside of the basin.

During an experiment, the surface flow pattern is recorded using video and still cameras. In addition, a topographic scanning system...allows us to document the 3-dimensional evolution of the surface topography during the run for later comparison with the surface-flow images, the preserved deposits, and theoretical predictions.

Once an experiment is complete, the resultant deposits are cut in a series of precise parallel faces, beginning near one edge. Each face is photographed. About every 10 faces, a peel is taken of the cut face. This serial microtome process allows us to build a 3-dimensional image of the deposits by stacking the sequence of photographed slices.

What kind of data are available?

Data from XES Basin runs are available from the National Center for Earth-surface Dynamics data repository. Search on "XES Basin" to find the link to the data or you can browse by keyword. Data are organized by the experimental run date. For example, "XES 01 1" are data from the first XES Basin experiment in 2001.

There are several types of data that you might find useful in your courses:


What experiments have been done so far?

XES 96 1: Effects of changes in base level under constant subsidence conditions. This was the prototype run of a small-scale version of the XES basin, using only ten subsidence cells. Images in this run show excellent examples of growth faults, as well as a wide range of sequence stratigraphic features.