Teaching the Process of Science

As Capri and Egger note in The Process of Science, too many students view scholarship as the memorization, regurgitation, and re-establishment of a fixed understanding. They fail to grasp that research is about pushing into the unknown to refine or refute current ideas and establish new ones. 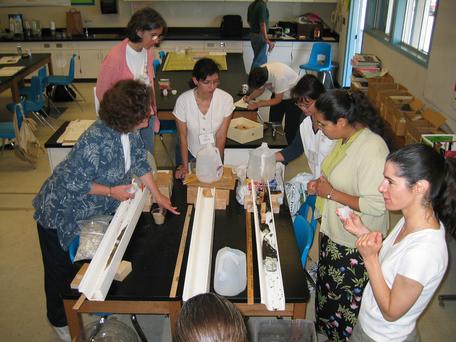 ×
We can subvert this tendency by more systematically and explicitly identifying the strategies of research we are teaching in any given assignment--and then articulating that to our students. Of course, a single assignment may involve more than one strategy from the list below. All the more reason for explicitly stating the goals and process of the assignment.

The following four research strategies may all be used after research questions and a logical and testable hypothesis are generated. Students may participate in the process of generating questions and hypotheses or instructors may choose to provide those for students.

Many students associate research with experimentation (or quasi-experimentation in which assignment to the treatment group is controlled, but not random). While some social scientists use the word "experiment" to mean something very different, here we will follow Capri and Egger's definition of a process in which "one or more variables are consciously manipulated and the outcome or effect of that manipulation on other variables is observed." While commonly applied in the natural sciences, examples can also be found in the social sciences. (See the University of Virginia's Virtual Econlab), a collection of on-line economics experiments) and even arts and literature (see the Legislative Simulation, an experiment in rhetoric and negotiation.)

One clear advantage of teaching the strategy of experimentation is found in the control students have over the research process. While not all experiments are equally "clean," the act of consciously attempting to control the environment so that the results focus on the results due to variation in the variable(s) of interest provides clear connection to the scholarly process. However, we must be careful not to reinforce students' false notions that experimentation is the only research strategy (even in the natural sciences).

Capri and Egger define description as, "involv[ing] the systematic observation and cataloging of components of a...system in a manner that can be utilized and replicated by other[s]." In the context of teaching with data, description is involved in collection of data (e.g. describing the chemical make-up of a meteorite) and as well as the analysis of data (e.g. unpacking the information included in a graphical representation of data or analysis performed by someone else). Of course, not all descriptions are of equal value. As Capri and Egger note, a key aspect of their definition is that the observations are systematic. For example, a sociological study of refuse production that carefully described the garbage of various groups but failed to take measurements on the same day of the week would be of questionable validity. Learning what and how to observe and describe the world around us is a key facet of dealing with data.

Modeling, according to Capri and Egger, "involves developing physical, conceptual, or computer-based representations of systems." One key learning outcome for the student engagement of the modeling strategy is an appreciation that models are simplified representations of the world by design. The world is far too complex for us to understand it in its entirety and so we use models that allow us to make progress. Thus, the fact that a model "isn't realistic in its assumptions" does not mean the model is unhelpful. The measure of a model is in its predictive power. As the saying goes, "it takes a model to beat a model."

Capri and Egger round out their list of research strategies with comparison which they define as, "used to determine and quantify relationships between two or more variables by observing different groups that either by choice or circumstance are exposed to different treatments." This includes all kinds of statistical analysis on data not generated by a formal experiment. In the social sciences, that is the vast majority of the work because the data are not generated by a consciously controlled process. It also includes epidemiology and data mining. In some cases, researches may collect data to make a comparison. Biologists, for example, may use this approach when comparing the biodiversity of two plots of land, one recently disturbed and the other disturbed one hundred years ago. Comparison as defined by Capri and Egger can also include understanding statistical results presented by others. It is important to note that some "comparisons" (using the proposed definition) are called "natural experiments" by some social scientists. Clear articulation of our research strategies includes unpacking these disciplinary differences for our students.