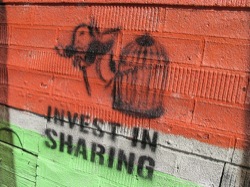 There are many varied uses of media in teaching and learning economics. If you are new to this teaching and learning technique please see our exemplar, Opportunity Cost and Normal Profit. If you would like to submit an example of your own please contact Dirk Mateer.
Skip to search results Skip to search facet filtersSkip to text search formSkip to pagination
Refine the Results↓

Healthcare in America: Whats Really Going On? part of Starting Point: Teaching and Learning Economics:Economics in Two-Year Colleges:Activities
By considering two NPR Radio shows from an economic perspective, students will understand the complexities of the healthcare system in the United States and the breadth of market failures throughout the system.

"Closer to Free" by The BoDeans part of Examples
This flash animation for the song "Closer to Free" describes the Economic Freedom of the World index, provides a summary of countries with high and low values of the index, and highlights the importance of economic freedom in a country's standard of living.

The Hudsucker Proxy: Using Media to Teach Economics part of Examples
This film chronicles the introduction of the hula hoop, a toy that set off one of the greatest fads in United States history. According to Wham-O, the manufacturer of the hoop, when the toy was first introduced in ...

A Beautiful Mind: Using Media to Teach Economics part of Examples
A Beautiful Mind won the Academy Award for best picture in 2001 and it chronicles the life of John Nash who is noted for his pioneering work on general equilibrium theory. This scene is a great way to discuss ...

Cartoon Physics part of Examples
This activity promotes the learning of basic physics principle by viewing cartoon videos where these principles are bent of broken.

Ebay: Using Media to Teach Economics part of Examples
EBay is an animated Flash file that provides an economic interpretation of the lyrics in order to help students learn economic concepts.

"Irreplacable" by Beyonce part of Examples
This flash animation for the song "Irreplaceable" demonstrates how the availability of substitutes affects the price elasticity of demand. Beyonce notes that her current boyfriend is not "irreplaceable," meaning that her demand for him is elastic.

Seinfeld: The Baby Shower part of Examples
This is a clip from Seinfeld in which Jerry does a cost -benefit analysis of installing illegal cable. He decides to commit the crime when he finds out there will be 75 televised Mets games on TV.