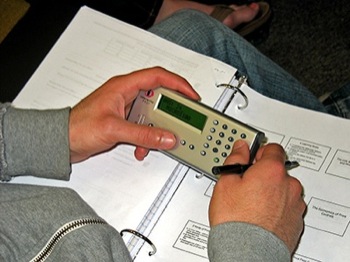 Known by many names, clickers are small devices used in class to actively engage students.

A Classroom Response System is not a magic bullet that will automatically transform the classroom into an active learning environment and increase student learning. It is one of many pedagogical tools that an instructor may choose to integrate with other learning strategies. After careful implementation, a Classroom Response System can have a dramatic impact on the classroom and students. After reviewing the literature, Caldwell (2007) reports "Most reviews agree that 'ample converging evidence' suggests that clickers generally cause improved student outcomes such as improved exam score or passing rates, student comprehension, and learning and that students like clickers."

A Classroom Response System is also known by other names such as a Personal Response System, Audience Response System, Student Response System, Electronic Response System, Electronic Voting System, and Classroom Performance System. Most people simply refer to such a system as "clickers" because the transmitter used to send answers looks like a TV remote control. Regardless of the formal name, every system has three common features. The first is a receiver which accepts answers or responses from students or the audience. It is plugged into a computer via a USB connection. The second is a transmitter or clicker which sends the responses. Third, each system requires software to store and manage the data. Learn more about the technical details of classroom response systems.

Each response system can be integrated with PowerPoint or used as stand-alone software. Either way, the same questions can be asked and data are collected in the same manner. Most systems allow for two methods to ask questions. The most common is a pre-created question that is typed into the software or PowerPoint slide before class and asked at a predetermined time. The other method is to create a question "on the fly" during class. This offers the instructor flexibility and spontaneous creativity when using the system. Since the data is received and stored electronically, answers can be quickly graded. The data can be manipulated in a spreadsheet or exported into files that are readable by most Learning Management Systems such as Blackboard.

Clicker technology has become associated with large classes but it can be just as effective in small classes. Please see Why Teach with a Classroom Response System for details about using clickers in different size classes.