What is Stereotype Threat? 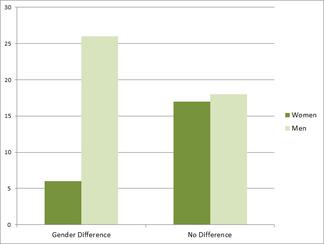 Provenance: Cheryl L. Dickter, College of William and Mary Christine Mallinson, University of Maryland, Baltimore County (UMBC)
Reuse: This item is offered under a Creative Commons Attribution-NonCommercial-ShareAlike license http://creativecommons.org/licenses/by-nc-sa/3.0/ You may reuse this item for non-commercial purposes as long as you provide attribution and offer any derivative works under a similar license.
Stereotype threat is "the threat of being viewed through the lens of a negative stereotype or the fear of doing something that would inadvertently confirm that stereotype". (Steele, 1999) When activated, stereotype threat causes students to perform worse on assignments than they might otherwise. This reaction is neurobiological in nature - the perceived threat stimulates cortisol production in the brain having the effect of reducing the available working memory for completing tasks.

A stereotype must be relevant to one's self for it to be threatening; in other words, one must care about the domain or behavior that the stereotype describes. But one need not believe in the stereotype for it to be threatening. This makes stereotype threat different than "self-fullfilling prophesy" where one's negative beliefs about oneself can sabotage performance. But trying to disprove a stereotype, by outperforming for example, has detrimental effects and paradoxically leads to a decrease in performance. 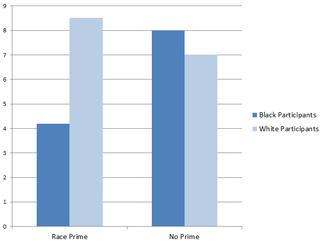 Hide
When asked to indicate their race, prior to completing a standardized test (left), African American students do more poorly compared to white students. When no such prompt is given (right), the two groups perform similarly to each other. (after Steele and Aronson, 1995)

Provenance: Cheryl L. Dickter, College of William and Mary Christine Mallinson, University of Maryland, Baltimore County (UMBC)
Reuse: This item is offered under a Creative Commons Attribution-NonCommercial-ShareAlike license http://creativecommons.org/licenses/by-nc-sa/3.0/ You may reuse this item for non-commercial purposes as long as you provide attribution and offer any derivative works under a similar license.
Language or prompts that call to mind relevant negative stereotypes can activate the threat. For example, one study (Steele and Aronson, 1995) found that simply asking African American students to indicate their race before taking a standardized test caused them to get fewer answers correct, answer fewer items, spend more time on the questions they did answer, and feel significantly more anxiety. Similarly, women performed worse than men on a difficult math exam if they were told that the test showed gender differences favoring men, but showed no difference in scores if not primed in that way (Steele, 1997).

One of the most insidious aspects of stereotype threat is that better students are more likely to be affected. As Steele (1999) said:

"The most achievement oriented students, who were also the most skilled, motivated, and confident, were the most impaired by stereotype threat." (Steele, 1999, p.48).

They hypothesize that these students have more of their self-worth tied up with school and thus try harder to prove the stereotype wrong. The effect is that the threat results in distraction, self-consciousness, evaluation apprehension, test anxiety, and loss of motivation.

Note that these effects are only visible for tests that are challenging. Easy assignments do not show a difference in scoring even when students are given prompts to elicit the threat.

Given all of this, a natural question would be whether or not students will respond to the opposite kind of prompting. It turns out that they do. This is called "Stereotype Lift." If students are told that the group to which they belong does particularly well on something, then they tend to do better that might otherwise be expected. Note, however, that this only works when the activated stereotype actually exists and the participants buy into it. The results are also not as strong as with Stereotype Threat, but it is statistically significant.