This module was developed by Katherine Kulick, College of William & Mary, expanding from a presentation at the 2013 Supporting Student Success in Geoscience at Two-year Colleges meeting.

English Language Learners (ELLs) are currently the fast growing segment of the public school student population in the United States. The K-12 ELL student populations in more than ten states increased over 200% in the ten-year period from 1995-2005. Seven more states saw their ELL student populations grow by 100-200% during the same time period (Data from National Clearing House for English Language Acquisition, 2010 Migration Policy Institute). More than ever, students graduating from high schools in the U.S. are entering college while still in the process of acquiring and/or refining their skills in English. Two-year colleges have already begun to provide instruction to this new wave of undergraduate students. "Today, about one in four students in community colleges is an immigrant and the numbers are increasing" (Crandall and Sheppard, 2004). 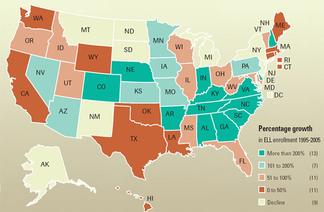 Provenance: Education Week http://www.edweek.org/ew/articles/2009/01/08/17immig.h28.html
Reuse: If you wish to use this item outside this site in ways that exceed fair use (see http://fairuse.stanford.edu/) you must seek permission from its creator.

Who are the English Language Learners (ELLs) in our classes?

The broad heading of "English Language Learners" includes several identifiable subsets of individuals who may have very different, and distinct, instructional needs:

Supporting academic success for the ELLs in our classes: 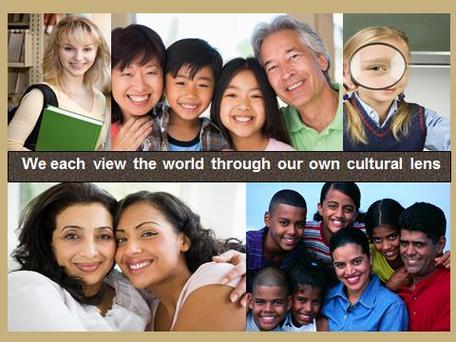 Provenance: Images are drawn from the Powerpoint ClipArt files.
Reuse: This item is offered under a Creative Commons Attribution-NonCommercial-ShareAlike license http://creativecommons.org/licenses/by-nc-sa/3.0/ You may reuse this item for non-commercial purposes as long as you provide attribution and offer any derivative works under a similar license.

Non-native speakers of English, and those who teach them, face challenges in the classroom due to the cultural perspectives that students and instructors alike bring to the tasks of learning and teaching. Each person views the world through their own cultural lens - which means that we bring to the classroom certain expectations concerning what takes place in the classroom and the appropriate roles for students and instructors. Unintended miscommunication may occur by not recognizing, or understanding, how societies assign different meanings to common everyday interactions:

Second language acquisition passes through a series of stages and takes more time than many people realize. At the point where students appear fluent and comfortable using English in social settings, their success in academic settings may still be at risk. The language skills needed for academic success are quite different from those necessary for basic interpersonal relationships and everyday life. Academic language requires more technical vocabulary, more sophisticated sentence structure, and a nuanced understanding of how language is used within academic disciplines. Particular areas of challenge include:

Crandal and Sheppard, (2004). ESL and Community College Support. A Project of the Council for the Advancement of Adult Literacy, Grantmakers for Education.