Mitigating the Impacts of Stereotype Threat and Solo Status

Stereotype threat and solo status are entangled with each other in terms of their effects on students' learning and performance on assignments. There are also too many potential stereotypes in action to reasonably isolate, so it makes the most sense to use approaches that don't focus on a single one, but rather raise all groups up. Luckily, there are a number of strategies that faculty can use in their classrooms to mitigate these effects and help students perform at their highest level.

Having students write self-affirmations enumerating their individual positive qualities can counteract the effects of both stereotype threat and solo status in subsequent tasks. Prompt them to write about their strengths or their personal characteristics, skills, values, or roles that they value or view as important. In one study, females and blacks who wrote about a characteristic of themselves they valued performed better on a math test they took immediately afterwards. In another, two 15-minute writing exercises at the beginning of a college physics class increased females' performance, especially for those who endorsed the "girls aren't good at science" stereotype. It's important to note that this benefit came with no detriment to the males' scores and that this intervention also reduces test-taking anxiety overall even if stereotype threat or solo status are not factors.

These self-affirmations are not handed in or graded (which might, in itself, trigger more anxiety). They are just for the students and they should be encouraged to write them in a way in which they are comfortable. In addition, they should be subtle interventions where the students are not told the purpose of the writing. There may be some benefit from other modes of self-affirming such as drawing or other creative outlet. 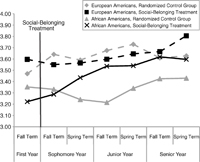 Hide
Fig. 1 from Walton and Cohen (2011). The chart shows the raw GPA of students over time differentiated by race and experimental group. The effects of telling freshmen that it's normal to have trouble adjusting to college life and work are clear in the GPA data throughout their college career. Details
Level the Playing Field

Framing social adversity in school as a shared - and short-lived - experience during freshman year can improve the students' GPA over the whole course of college, especially for African Americans. Point out that everyone has trouble adjusting to college and the higher expectations that come with it, but that they are capable of meeting those standards. It also helps to convince them that every effort has been made to avoid or eliminate gender, ethnic, and cultural bias from the questions and assignments.

When establishing this "culture of high expectations," it is worth noting that saying we want everyone to succeed doesn't mean lowering the standards they are measured by, but helping all students reach those standards.

Seeing and learning about examples of successful people defying common stereotypes can help students overcome the challenges themselves. Including pictures of scientists who are women and people of color in lectures and presentations is one example. Guest speakers and biographical information about ingroup role models can also serve as examples that it's possible to be successful regardless of the stereotype.

Providing this kind of support has been shown to improve the attitudes, identification, self-efficacy, and career interest in STEM fields of women and African American students. The positive effects of these role models are highest when the models are perceived by the students to be most similar to themselves.

It's also worth noting that some students feel inferior just because they are attending a two-year college. This intervention is a good way to show them that others have started in the same fashion and gone on to have very rewarding futures.

Faculty themselves may have been "on the receiving end" of stereotype threat and/or solo status. It's important to share those experiences with our students as a way of showing them that "The Professor" can relate to their struggles. This allows faculty to serve as the Role Model that they can identify with.