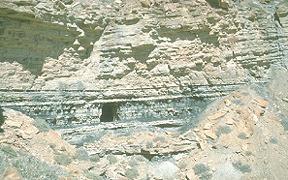 Abandoned entrance in a coal bed on the Kaiparowits Plateau. Details

From a health point of view, coal mining can be very dangerous. The coal dust can cause respiratory ailments, and there is a danger of coal combustion during operations in hot climates ([Ali, 2003] ). 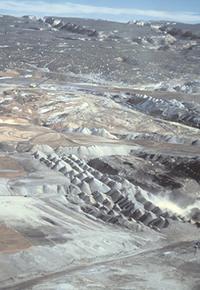 Aerial overview of the Kayenta mine, Black Mesa, Arizona. Details

On the Navajo Nation, coal mining continues today on the Black Mesa and Kayenta mines. These two mines combined produce about 13.3 million tons of coal annually. The lease for coal mining in the Black Mesa mine is about to expire, and whether mining operations should be allowed to continue is being discussed (Water Fear a Threat to Coal Slurry for Power ( This site may be offline. ) ).

For over 30 years, Peabody Coal Company, which is the largest coal company in the world, has pumped over 1 billion gallons of pure drinking water from the Navajo Aquifer beneath Black Mesa, to slurry coal to the Mohave Generating Station in Nevada, 273 miles away. Water is very scarce here, and both the Navajo and Hopi use this as a major source of drinking water (Water Fear a Threat to Coal Slurry for Power ( This site may be offline. ) ).

Despite opposition from many Navajo, the Navajo Nation and Sithe Global LLC, based in Houston, plan to build a 1,500-megawatt coal-fired power plant, Desert Rock, on 600 acres of tribal land in San Juan County. The plan includes mining an additional 6 million tons of coal annually at the existing BHP mine on tribal land. White, who lives 15 miles from the proposed site of the new power plant said, "The rich companies, looking for oil and coal, always go out to communities that are cash-poor and land-rich, and we are the targets. Indigenous are the most cash-poor and land-rich. We OK these things because our kids need jobs." (Policy Debate: Power Plants on Navajo Land (more info) )

An EPA report shows that two power plants and their coal mines in San Juan County released 13 million pounds of chemical toxins into the Four Corners' air in 2000 alone. These toxins are breathed by Navajo, Jicarilla Apache, Southern Ute and other residents in the Four Corners area of New Mexico, Colorado, Arizona and Utah (Policy Debate: Power Plants on Navajo Land (more info) ).