Political Issues on the Navajo Nation from Uranium Mining

Once the dangers of uranium mining gradually became clear, a few Navajo began to ask for accountability from the government. Throughout the 1970's, a few people struggled both to put controls on operations in the mines and to help Navajo victims of radiation exposure find some compensation. In December 1978, one hundred Navajo joined with Friends of the Earth to file suit against six federal agencies, demanding a regional study of the impacts of uranium mining. The case was eventually rendered moot since the uranium activity at that time stopped due to a decline in uranium prices ([Ali, 2003] ).

Harry Tome, a Dineh from Red Rock chapter, worked throughout the decade to bring relief to Navajo miners. Toward the end of the eighties, former U.S. Secretary of the Interior Stewart Udall intervened, and the Radiation Exposure Compensation Act was signed to law in 1990. The remediation programs for the mines are still far from over ([Ali, 2003] ).

An important new government report, Health and Environmental Impacts of Uranium Contamination in the Navajo Nation Five-Year Plan (PDF 1.31 MB) was released by the House Committee on Oversight and Government Reform March 3, 2008. 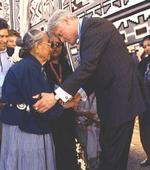 Policy Resources about Uranium Mining on the Navajo Nation

Online resources containing information about policies from uranium mining on the Navajo Nation: