Exploration and Development History of Uranium Mining on the Navajo Nation 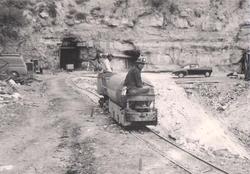 Escalation of the cold war between the United States and the Soviet Union sent workers to uranium mines for ore to process into nuclear weapons. More than fifteen thousand people have mined uranium or worked in ore processing mills in the Southwest since the 1940's, and some 13 million tons of uranium ore was mined while the mines were in operation ([Ali, 2003] ).

Because the United States Atomic Energy Commission announced in 1948 that it would guarantee a price for and purchase all uranium ore that was mined in the United States, uranium mining on the Colorado Plateau began. Uranium here was easy to mine because it was found in sandstone deposits.

The US government continued to be the sole purchaser of uranium in the United States until 1971, but purchases of uranium by the Atomic Energy Commission dropped in the late 1960's when the US government decided it had acquired enough. By 1971, commercial purchases rose and remained strong into the 1980's ([Brugge & Goble, 2002] (more info) ).

By 1958, there were 7,500 reports of uranium finds in the United States with over 7,000,000 tons of ore identified. During the peak in the mid-1950's, there were about 750 mines in operation. The Navajo Reservation is situated on one corner of the uranium-mining belt and was greatly affected by the mining boom (Figure 1). More than 1000 abandoned uranium mines shafts are now estimated to lie on Navajo land ([Brugge & Goble, 2002] (more info) ).

They weren't mining for nothing. When uranium was being mined, our country was at war, and research was underway to produce the atomic bomb. This required uranium. The development of military and peaceful uses of nuclear energy has shaped the course of modern history in a process that continues today. Nuclear issues have influenced the evolution of science and technology, domestic politics and international relations, as well as the arts and humanities (Alsos - Digital Library for Nuclear Issues ( This site may be offline. ) ). To further investigate nuclear issues, click here ( This site may be offline. ) .

For a uranium overview on domestic concentrate production and other related information from 1949-2003, click here (more info) .

Resources related to the exploration and development history of uranium mining.

Show me resources related to exploration and development history of uranium mining.