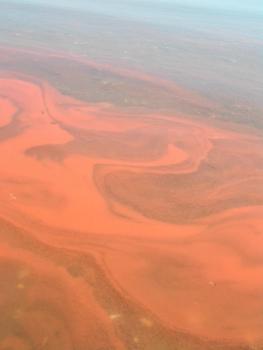 What is Red Tide?

Red tide is a phenomenon caused by algal blooms (Wikipedia definition) during which algae become so numerous that they discolor coastal waters (hence the name "red tide"). The algal bloom may also deplete oxygen in the waters and/or release toxins that may cause illness in humans and other animals. Species in the United States that release these harmful toxins include:

Where Are Red Tides Found?

How Are Red Tides Harmful?

Red tide algae make potent natural toxins. It is unknown why these toxins are created, but some can be hazardous to larger organisms through the processes of biomagnification and bioaccumulation. Grazers such as fish and krill are unaffected by the toxins, so as they eat the algae the toxins are concentrated and accumulate to a level that is poisonous to organisms that feed on them. Large fish kills and several mammalian diseases and deaths have been attributed to consumption of shellfish during red tide algal blooms. Diseases that may affect humans include:

Hide
This Alexandrium species can cause paralytic shellfish poisoning. Image taken by David Patterson and Bob Andersen, provided courtesy of the microscope website.

Hide
This Dinophysis species can cause diarrhetic shellfish poisoning. Image taken by Mona Hoppenrath, courtesy of the microscope website.

What is Being Done About Red Tide?

Technological advancements such as satellite imagery have allowed scientists to better track and monitor harmful algal blooms. Tracking and monitoring red tide algae helps reduce harmful effects of the algae by providing warnings against eating infected shellfish and against swimming in infected waters. For example, the Sarasota Operations Coastal Oceans Observation Lab (SO COOL (more info) ) has developed instruments that can test for red tide algae in coastal waters. Finally, researchers are attempting to develop an antidote to the red tide toxins. Interestingly, while developing such anti-toxins, researchers have found a possible cystic fibrosis (more info) treatment.