Paleoclimatology is the study of past climates. Since it is not possible to go back in time to see what climates were like, scientists use imprints created during past climate, known as proxies, to interpret paleoclimate. Organisms, such as diatoms, forams, and coral serve as useful climate proxies. Other proxies include ice cores, tree rings, and sediment cores (which include diatoms, foraminifera, microbiota, pollen, and charcoal within the sediment and the sediment itself).

How Are Organisms Used As Proxies?

Foraminifera, also known as forams, and diatoms are commonly used climate proxies. Forams and diatoms are shelled organisms found in aquatic and marine environments. There are both planktonic, or floating in the water column, and benthic, or bottom dwelling, forms. Foram shells are made up of calcium carbonate (CaCO3) while diatom shells are composed of silicon dioxide (SiO2). These organisms record evidence for past environmental conditions in their shells. Remains of foram and diatom shells can be found by taking sediment cores from lakes and oceans, since their shells get buried and preserved in sediment as they die. The chemical make up of these shells reflect water chemistry at the time of shell formation. Stable oxygen isotope ratios contained in the shell can be used to infer past water temperatures. These oxygen isotopes are found naturally in both the atmosphere and dissolved in water. Warmer water tends to evaporate off more of the lighter isotopes, so shells grown in warmer waters will be enriched in the heavier isotope. Measurements of stable isotopes of planktonic and benthic foram and diatom shells have been taken from hundreds of deep-sea cores around the world to map past surface and bottom water temperatures.

Hide
Individual events such as forest fires are recorded in tree-rings. The dark arcs that interrupt the sequence of rings in this sample were caused by fires in the 19th century. (Photograph copyright Henri D. Grissino-Mayer and accessed via the NASA Earth Observatory website). 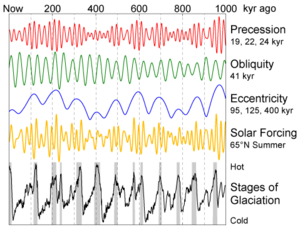 Time scale affects interpretations of climate change. Climate has both long term trends and short term variability. In looking at longer time scales, major shifts in climate such as the ice ages are easily recognizable, and viewing a long-term data set can provide the observer with a sense of the "big picture" of the climatic trends. Short term variations, like a colder than average month, can exist within longer term patterns such as the warming trend over the past 1000 years. The coexistence of short and long term trends occuring simultaneously through time complicates our ability to unravel climate change.