The Gulf of Mexico Dead Zone 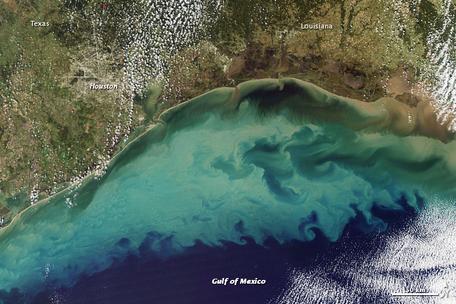 What is the Gulf of Mexico Dead Zone?

The Gulf of Mexico dead zone is an area of hypoxic (link to USGS definition) (less than 2 ppm dissolved oxygen) waters at the mouth of the Mississippi River. Its area varies in size, but can cover up to 6,000-7,000 square miles. The zone occurs between the inner and mid-continental shelf in the northern Gulf of Mexico, beginning at the Mississippi River delta and extending westward to the upper Texas coast.

The largest dead zone ever recorded in the Gulf of Mexico was reported by National Geographic News in August 2017: New Jersey-Size Dead Zone Is Largest Ever in Gulf of Mexico 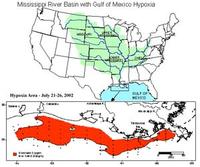 Hide
The Gulf of Mexico dead zone varies in size annually, but may extend from the Louisiana/Alabama coast to the westernmost Texas coast. Photo courtesy of NOAA.

Where Are the Dead Zones?


What Causes the Dead Zone?

The dead zone is caused by nutrient enrichment from the Mississippi River, particularly nitrogen and phosphorous. Watersheds within the Mississippi River Basin drain much of the United States, from Montana to Pennsylvania and extending southward along the Mississippi River. Most of the nitrogen input comes from major farming states in the Mississippi River Valley, including Minnesota, Iowa, Illinois, Wisconsin, Missouri, Tennessee, Arkansas, Mississippi, and Louisiana. Nitrogen and phosphorous enter the river through upstream runoff of fertilizers, soil erosion, animal wastes, and sewage. In a natural system, these nutrients aren't significant factors in algae growth because they are depleted in the soil by plants. However, with anthropogenically increased nitrogen and phosphorus input, algae growth is no longer limited. Consequently, algal blooms develop, the food chain is altered, and dissolved oxygen in the area is depleted. The size of the dead zone fluctuates seasonally, as it is exacerbated by farming practices. It is also affected by weather events such as flooding and hurricanes.

What Are the Effects?

Nutrient overloading and algal blooms lead to eutrophication (link to USGS definition), which has been shown to reduce benthic (link to definition) biomass and biodiversity. Hypoxic water supports fewer organisms and has been linked to massive fish kills in the Black Sea and Gulf of Mexico.

The Gulf of Mexico is a major source area for the seafood industry. The Gulf supplies 72% of U.S. harvested shrimp, 66% of harvested oysters, and 16% of commercial fish (Potash and Phosphate Institutes of the U.S. and Canada, 1999). Consequently, if the hypoxic zone continues or worsens, fishermen and coastal state economies will be greatly impacted. 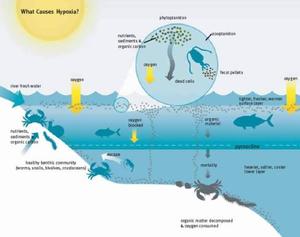 Hide
When production increases in an ecosystem, organic matter, such as algal cells and fecal pellets, increases. This situation can lead to hypoxia when decaying bottom organic matter depletes oxygen and water stratification blocks oxygen replenishment. Upwelling oxygen-rich water or destruction of the stratification can alleviate this problem. Diagram courtesy of the U.S. Environmental Protection Agency.

What Can be Done to Remediate the Problem?

The key to minimizing the Gulf dead zone is to address it at the source. Solutions include:

These solutions are relatively simple to implement and would significantly reduce the input of nitrogen and phosphorus to the Gulf of Mexico. A similar approach has been used successfully in the Great Lakes' recovery from eutrophication.

The government is also funding efforts to restore wetlands along the Gulf coast to naturally filter the water before it enters the Gulf.

General Collection Resources such as news articles, web sites, and reference pages provide a comprehensive array of information about dead zones- in the Gulf of Mexico and worldwide!