Methods of Investigation used by Geoscientists

This page draws from (Manduca and Kastens, 2012) and discussion at the 2012 Teaching the Methods of Geoscience Workshop. 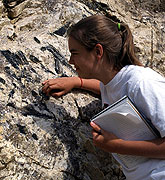 ×
Many geoscientists have trouble recognizing their research methods in a typical description of "the scientific method," which often focuses on the use of controlled experiments to test hypotheses. Geoscientists rarely have the opportunity to perform controlled experiments, however. Instead, hypothesis testing in the Earth sciences is grounded in methodical observations and detailed descriptions of the natural world (Manduca and Kastens, 2012) . The processes and products that Earth scientists explore are often challenging to observe because they occur over long time periods or long in the past; they are remote - deep within the interior of Earth, at the bottom of the ocean, or on another planet, for example; or they occur over large spatial scales. To overcome these challenges, Earth scientists utilize several strategies for focusing their data collection and observations and testing their hypotheses:

When testing hypotheses using these strategies, Earth scientists may collect detailed descriptions, perform experiments, develop models, and compare descriptions and results (for more information about these methods, see additional resources. The ultimate test of the hypothesis, however, is its ability to explain the observations from the natural world (Manduca and Kastens, 2012) . Those observations may take the form of descriptions of rock types or soils in the field, laboratory measurements of the age of a rock, satellite observations of ocean temperatures, etc.

Teaching the methods of investigation

The single most important thing you can do in your teaching is to be explicit in highlighting and describing the methods you are using.

Show connections to the big ideas, essential principles, and fundamental concepts about geoscience methods of investigation in the literacy documents

Connections to big ideas, essential principles, and fundamental concepts about methods of investigation in the geoscience literacies

Additional resources about the methods of science at Visionlearning