Data that are distributed throughout 3-dimensional space are at the core of geoscience. Geologists, atmospheric scientists, and oceanographers all routinely explore and analyze data shown on maps. In addition, geoscientists easily combine evidence from a wide range scales—extracting information about the uplift of mountain ranges from the textures seen in a thin section for example, or integrating data from individual ocean buoys to determine currents and patterns across the entire Pacific Ocean. 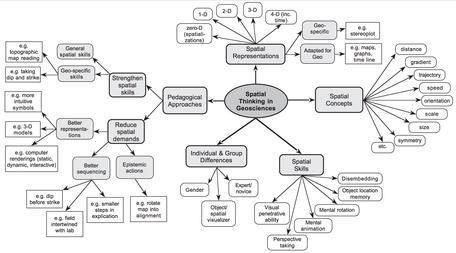 ×
This is the concept map from Manduca and Kastens, 2012.

Provenance: Manduca, C.A., and Kastens, K.A., 2012, Mapping the Domain of spatial thinking in the geosciences, GSA Special Paper 486
Reuse: Permission granted by GSA to use this image.
This is a spatial skill... Many times, students are required to understand spatial visual information contained within abstract visualizations. For some people, understanding spatial representations can be a barrier to becoming a successful geoscientist. This barrier can be overcome through good instruction and practice.

This concept map (Manduca and Kastens, 2012) illustrates the domain of spatial thinking in the geosciences. Of primary interest here are the nodes of spatial skills, which discusses the habits of mind utilized by geoscientists to think over a broad range of spatial scales, and pedagogical approaches, which describes strategies for and impediments to teaching spatial skills. You can download text to accompany the concept map (Acrobat (PDF) 94kB Aug4 13).

Learning outcomes for spatial thinking benefit from specificity. For example, you may want students to be able to "read a topographic map," but this phrase may be completely opaque to a beginning student. Instead, Learning outcomes that addresses this habit of mind might be something like:

Resources for teaching about spatial thinking

Connections to big ideas, essential principles, and fundamental concepts about spatial thinking in the geoscience literacies