In this unit, students develop a simple computational climate model to test the relative influence of several forcing mechanisms, including sunspots and albedo, on Earth's temperature.

Using Mathematics and Computational Thinking: Use simple limit cases to test mathematical expressions, computer programs, algorithms, or simulations of a process or system to see if a model “makes sense” by comparing the outcomes with what is known about the real world. HS-P5.4:

Using Mathematics and Computational Thinking: Create and/or revise a computational model or simulation of a phenomenon, designed device, process, or system. HS-P5.1:

Scale, Proportion and Quantity: Time, space, and energy phenomena can be observed at various scales using models to study systems that are too large or too small. MS-C3.1:

Weather and Climate: The foundation for Earth’s global climate systems is the electromagnetic radiation from the sun, as well as its reflection, absorption, storage, and redistribution among the atmosphere, ocean, and land systems, and this energy’s re-radiation into space. HS-ESS2.D1:

Earth's Systems: Use a model to describe how variations in the flow of energy into and out of Earth’s systems result in changes in climate. HS-ESS2-4: 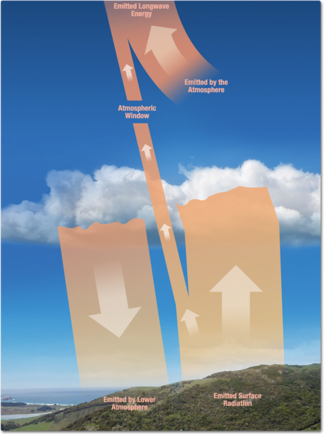 ×
A schematic diagram of outgoing radiation at Earth's surface.

Provenance: Image from NASA: http://missionscience.nasa.gov/ems/13_radiationbudget.html
Reuse: This item is offered under a Creative Commons Attribution-NonCommercial-ShareAlike license http://creativecommons.org/licenses/by-nc-sa/3.0/ You may reuse this item for non-commercial purposes as long as you provide attribution and offer any derivative works under a similar license. 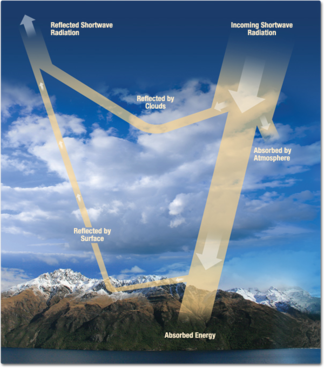 ×
A schematic diagram of incoming solar radiation at Earth's surface.

Provenance: Image from NASA: http://missionscience.nasa.gov/ems/13_radiationbudget.html
Reuse: This item is offered under a Creative Commons Attribution-NonCommercial-ShareAlike license http://creativecommons.org/licenses/by-nc-sa/3.0/ You may reuse this item for non-commercial purposes as long as you provide attribution and offer any derivative works under a similar license.

Students will explore Earth's radiation budget using several versions of a simple climate model often referred to as a "layer model." Earth receives energy from the sun, some of which is reflected and most of which is absorbed near the surface. Energy is then re-radiated upward from the surface; some is absorbed and re-radiated by the atmosphere, and some goes nearly directly to space. An imbalance between incoming and outgoing energy results in a change in average global temperature until equilibrium is restored.

Over the course of this exercise, students will compare the effects on average global temperature of differing strengths of the greenhouse effect. Using this same simple model, students will examine the effects on temperature of changes in incoming solar radiation approximating sunspot cycles. Finally, students will drive the model using observed forcings from the last 1000 years, including volcanic eruptions, aerosols, sunspots, and greenhouse gas emissions, and compare the results to observed and reconstructed temperature records over this same period.

This exercise addresses several of the guiding principles of the InTeGrate program. In particular, it requires the use of systems thinking, develops students' abilities to use numerical modeling to generate and test geoscientific hypotheses, makes use of authentic Earth surface temperature data, and addresses a grand challenge facing society, anthropogenic warming.

This unit is intended to be used in a three- to four-hour class period that meets once a week. It can be used as part of this modeling course or it can be adapted as a lab exercise for courses in environmental science or climate science. For this module, students should come to class prepared to take a short quiz on the assigned reading. Thereafter they will be led through a series of prompts designed to help them create and experiment with a number of simple models using the iconographic box modeling software STELLA (see https://www.iseesystems.com/store/products/ for different options for purchasing student or computer lab licenses of STELLA or for downloading a trial version). Students should also have access to Microsoft Excel or similar spreadsheet software.

For those learning to use STELLA, we suggest the online "play-along" tutorials from isee systems. You can find them here: isee Systems Tutorials.

In addition to the Kump et al. reading (see References and Resources below), students should complete the Unit 3 Student Reading, which contains extra background information as well as explanation of some of the mathematics involved.

can be found here.

Instructors can download versions of the STELLA simple climate models below:

All models were created using STELLA Professional and should open on any subsequent version of STELLA. If you are using an earlier version of STELLA, the complete model graphics and equations can be found in the answer key so that you can reconstruct the models yourself.

We generally post the readings and assignments for students to an LMS site (e.g. Moodle, Blackboard, Canvas). Students can open the assignment in Microsoft Word on the same computer they are using to construct the STELLA model and then answer the questions by typing directly into the document. Students can either print a paper copy to hand in to the instructor or email their modified file to the instructor. It is very straightforward to copy graphs and model graphics out of STELLA and to paste them into Word. Simply select the items to be copied, hit copy in STELLA, and paste into Word. Alternatively, you can have students use screenshots. There is no need to export graphics to jpg.

A typical four-hour class session might be broken up into the following sections: