Unit 5: Predicting the Effects of Climate Change on Soil Loss

In this unit students interpret and apply the RUSLE model for soil loss to argue about issues surrounding sustainable agriculture.

Stability and Change: Stability might be disturbed either by sudden events or gradual changes that accumulate over time. MS-C7.3:

Human Impacts on Earth Systems: Human activities have significantly altered the biosphere, sometimes damaging or destroying natural habitats and causing the extinction of other species. But changes to Earth’s environments can have different impacts (negative and positive) for different living things. MS-ESS3.C1:

Global Climate Change: Human activities, such as the release of greenhouse gases from burning fossil fuels, are major factors in the current rise in Earth’s mean surface temperature (global warming). Reducing the level of climate change and reducing human vulnerability to whatever climate changes do occur depend on the understanding of climate science, engineering capabilities, and other kinds of knowledge, such as understanding of human behavior and on applying that knowledge wisely in decisions and activities. MS-ESS3.D1:

Expand for more detail and links to related resources

Follow the links above to find activities from Teach the Earth on a specific topic.
Used this activity? Share your experiences and modifications

This unit directly supports multiple InTeGrate guiding principles. It encourages students to use systems thinking to investigate interactions between variables called factors that contribute to soil erosion and to evaluate how these factors could be affected by climate change. The grand challenge of sustainability is addressed through consideration of soil erosion, which is inherently interdisciplinary, as it involves the influence of both natural (geologic) processes and human (agricultural) activity and decision-making.

This unit builds on concepts presented in units 1-4 of the Growing Concern Module, but could also be implemented as a stand-alone unit. It is designed for use in a 50-minute class period. Students are required to complete a homework assignment prior to this class period to prepare for the first activity. Instructors with more class time may choose to have students work on the homework in class prior to beginning the first activity. This unit is appropriate for a variety of class sizes. as students work in small groups on both activities. The physical classroom setting must be able to accommodate students working in groups of four during the first activity.

In this unit, students begin by completing a homework assignment to prepare in advance. In class, they first work in cooperative learning groups to share what they learned from the homework with the rest of the class. Next, they participate in a guided lecture facilitated by the instructor. Finally, they complete a follow-up homework that allows them to synthesize what they have learned.

Each student will complete a reading, then answer questions provided on the Pre-work for Unit 5 student page. Students will investigate one of four different factors that influence erosion rates. They will bring their responses to the discussion questions and use this information in an in-class activity.

The instructor will need to assign students to one of the four factors in roughly equal numbers.

The four assigned topics are:

Note: These factors are based on the Revised Universal Soil Loss Equation (RUSLE) defined by Renard et al. (1991), where: 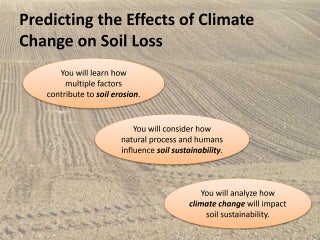 The in-class portion of this unit is a guided lecture that intersperses active learning activities throughout. The instructor can use the provided presentation (PowerPoint 2007 (.pptx) 3.4MB Jul30 14) to guide the class period. Instructions are provided in the Notes section of the Powerpoint slides and an outline of the guided lecture is included below.

In the homework, students will synthesize what they have learned in this unit and practice using systems language to describe relationships in the system under investigation.

The activities in this unit require students to work cooperatively to consider complex issues from a systems perspective. This may be new for some students, and they may need more guidance from the instructor than is provided on the handouts. These activities are intended to give students a chance to think through the concepts on their own, so some of the questions are intentionally open-ended with multiple "correct" answers. It is important for the instructor to circulate and help students as they are working to alleviate frustration that can occur as a result of this type of work.

The follow-up homework is intended to be used as a summative assessment for this unit.

Links to answer keys for the pre-work and homework assignments are provided below.