Unit 4: Using SoilWeb to Investigate the Soil Beneath You

Soilweb is used to ascertain what is beneath our feet and to argue the implications of the composition of the soil horizons found to the utilization of the soil.

Developing and Using Models: Develop and/or use a model to predict and/or describe phenomena. MS-P2.5:

Structure and Function: Complex and microscopic structures and systems can be visualized, modeled, and used to describe how their function depends on the shapes, composition, and relationships among its parts; therefore, complex natural and designed structures/systems can be analyzed to determine how they function. MS-C6.1:

Structure and Function: Investigating or designing new systems or structures requires a detailed examination of the properties of different materials, the structures of different components, and connections of components to reveal its function and/or solve a problem. HS-C6.1:

Students will use SoilWeb™, a smartphone and web application that pulls detailed soil survey data from both the 1:24,0000 Soil Survey Geographic database (SSURGO) and the 1:250,000 scale State Soil Geographic database (STATSGO). Students will retrieve soil information for the soil beneath them. They will diagram soil horizons and compare them to a profile of soil organic matter and determine the most fertile horizon. Finally, students will complete a jigsaw activity comparing local soil erosion rates, soil horizons, and soil organic matter to other sites. After students share site comparisons, they will reflect on our agricultural future and solutions needed to mitigate lost soil resources. They will discuss how the speed at which we implement soil solutions will impact society and the economy.

This unit is designed for a 50-minute period in an introductory (undergraduate) geology, environmental science, critical zone, agricultural, soil, or sustainability course.

The activities in this unit are designed to be used in classrooms of various sizes. Instructors should make sure that students have at least one smartphone per student pair, or access to computers. Activities were written for in-class use, but could be altered to serve as homework questions. Pre-work prepares students with background information on the function and spatial distribution of soil organic matter. Part 1 student explorations teach students how to use the SoilWeb™ to retrieve local soil information. After gaining this expertise, students will complete a jigsaw activity in which each group compares local soil profiles (i.e. soil horizons and soil organic matter) with other locations and reflects on differences in sustainability.

This unit (4) follows Unit 3 in which students explore the spatial distribution of natural and cropland erosion as well as graph erosion rates. It precedes Unit 5, which has students compare local erosion data to an existing global study and then consider the impact of climate change on soil erosivity. It can be completed individually; however, figures used in Unit 4 are revisited to improve retention. If the instructor has a longer class period, soil horizons could be examined with a coring device or a pit. Placing cores against large sheets of white paper makes color analysis easiest. Collected samples could be compared to those retrieved using SoilWebTM.

In this unit, students will work with in pairs to use the SoilWeb™ software/smartphone app to investigate soil horizons and percent soil organic matter profiles in the soil beneath them. Students will reflect on how their newly gained soil knowledge relates to food and fiber sustainability. Rulers can help students draw soil profiles to scale. Also, instructors should test the smartphone app before class, as some locations are not tied to soil profiles. If the smartphone app does not work, the web version allows for site selection. 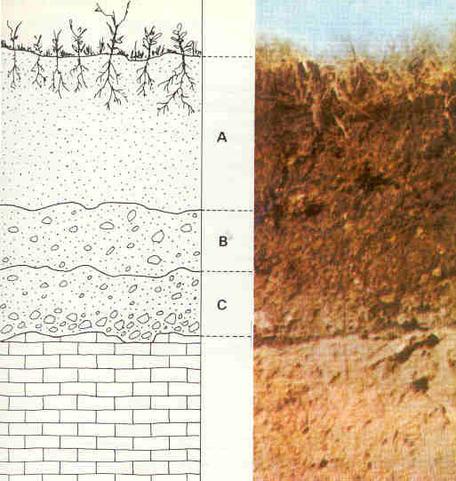 Provenance: http://en.wikipedia.org/wiki/Soil#mediaviewer/File:Estructura-suelo.jpg
Reuse: This item is offered under a Creative Commons Attribution-NonCommercial-ShareAlike license http://creativecommons.org/licenses/by-nc-sa/3.0/ You may reuse this item for non-commercial purposes as long as you provide attribution and offer any derivative works under a similar license.

Students should complete a short reading and reflection assignment to better understand soil organic matter, a key factor in soil fertility. They will describe the importance of soil organic matter to supporting plant growth and reflect on the physiographic controls on its distribution. In addition, they will consider how soil surveys are created and how the scale of study (i.e., the number of samples collected per hectare) affects the utility of a soil survey to management decisions. This will give them some perspective on how the soil profiles like those they view in class can be used.

Instructors should project the Soil Health PowerPoint and introduce learning goals. Next they should project slide 2 and ask students "What does healthy soil look like?" Students will Think-Pair-Share and the instructor should call on a few teams for examples. Then the Instructor can project slide 3 and point out that darker soil color is associated with fertility and describe that healthy soil is defined by it's ability to support life by functioning as a living ecosystem that can be managed to provide nutrients for plant growth, store water for drier periods, and filter pollutants.Transitions in soil color and other physical properties help soil scientists designate soil horizons that characterize transitions in soil properties.

Instructors should hand out the worksheet activity designed for think-pair-share that encourages students to discuss their findings as they use SoilWebTM. They can also project slide 4 of the Soil Health PowerPoint to review the instructions in class. Students will draw soil horizons and percent soil organic matter to scale. Comparing the two, students will discuss which soil horizon controls fertility. After students complete the first part of the worksheet, the instructor should have a volunteer quickly diagram their results on the board.Other students should then be asked if they agree, or would like to add to the profile.


While projecting slide 5 of the Soil Health PowerPoint, the instructor should divide students into small groups to complete a jigsaw activity. Student teams will compare erosion rates, soil horizons, and percent soil organic matter with one other location (slides 6-14). The instructor should also project or provide the "continental average" and "cropland average" erosion figures for students to identify erosion rates associated soil locations. Students will determine how quickly soil fertility at their will disappear under present erosion rates. They will summarize differences in the ability of each site to support present and future crop growth. The instructor should ask groups (or a representative group) to report their findings to the rest of the class. Students will find that sites vary in their ability to sustain crop growth, and that this variation is a result of both erosion and the presence and thickness of the A-horizon. On an exit card, students will reflect on what they have learned about the future of our soil sustainability and the need to implement solutions such as no-till, cover crops, and composting sooner rather than later.

Students might benefit from loading SoilWebTM on their phones before the start of class. Alternatively, an instructor can provide computers or tablets to teams in smaller classes. Instructors should also walk around to ensure students are on task as they complete the first worksheet. Introductory students will benefit from a discussion on how to use a ruler to draw the profiles to scale. Students who understand how to do this could be asked to explain it to their group members. Some students may need to use their smartphone to identify where the soil samples they are examining are located on the erosion figures.

Follow-up should be planned after looking at the exit card responses. Instructors could provide a summary of responses and highlight those that best address soil resource challenges and solutions.

Answer keys for pre-work, in-class, and homework are important to provide for follow-up work (e.g. the summative assignment in Unit 6).