Unit 1: Impacts of Land Use

Students use observational skills to interpret connections within the Earth system. Sphere interactions are identified by employing various crosscutting concepts.

Constructing Explanations and Designing Solutions: Construct an explanation that includes qualitative or quantitative relationships between variables that predict(s) and/or describe(s) phenomena. MS-P6.1:

Constructing Explanations and Designing Solutions: Apply scientific ideas, principles, and/or evidence to construct, revise and/or use an explanation for real- world phenomena, examples, or events. MS-P6.4:

Analyzing and Interpreting Data: Analyze and interpret data to determine similarities and differences in findings. MS-P4.7:

Stability and Change: Stability might be disturbed either by sudden events or gradual changes that accumulate over time. MS-C7.3:

Patterns: Patterns can be used to identify cause and effect relationships. MS-C1.3:

In this introductory unit, students will learn about the fundamental role of observation by viewing photographs of both agricultural and non-agricultural (natural) landscapes and making independent observations. They will learn how to relate physiographic features to land use by drawing conclusions about how the physiography of the land affects or is affected by various land use practices. They will then discuss their observations in small groups, organize their thoughts, and explain their conclusions in a classroom oral presentation. Finally, students will consider landscape features in the context of Earth systems and discuss how these systems are impacted by human activity. 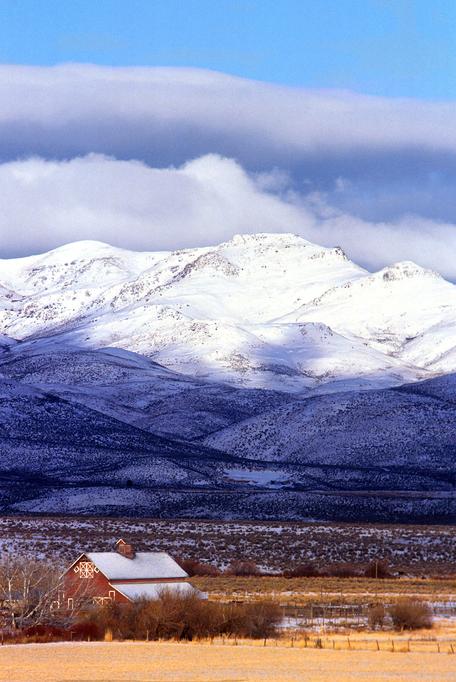 ×
A view of both natural and agricultural landscapes in Reynolds Creek Experimental Watershed, Idaho

Provenance: Scott Bauer, USDA ARS
Reuse: This item is in the public domain and maybe reused freely without restriction.

This unit directly supports multiple InTeGrate guiding principles, and addresses grand challenges by helping students view soil as a natural resource that is vital to the sustainability of agricultural systems. Students practice the methods of geoscience by making their own observations and considering the differences between these observations and their interpretations. Students are introduced to the interdisciplinary nature of societal problems by recognizing the role of natural and anthropogenic processes in shaping the landscape. Finally, students consider basic interactions among the spheres as an introduction to systems thinking.

This unit is designed to be used in any 50-minute introductory soils/agriculture, geology, or environmental science class as an introduction to geoscientific thinking. It can be conducted in any size class, and can easily be used in different classroom settings without making adjustments. There is no special equipment required and students will not need mastery of other material before its use. Activities are written for in-class use, but the small-group work could be altered to serve as homework (see Teaching Notes and Tips).

When you are driving through the countryside or walking through a park, do you watch the rows of crops drift by or do you notice how the trees you are passing relate to the landscape? Your students will learn to view the landscapes around them in a new light after completing this unit. They will spend approximately 15 minutes in small groups observing and describing pictures of both agricultural and non-agricultural landscapes. They will then interpret the relationship of the physiographic features in the photographs to the actual land use. Comparing agricultural land use and its obvious physiographic impacts to non-agricultural land will help them to understand this type of anthropogenic impact on the land. This unit takes approximately 50 minutes and is intended for introductory classes in soils/agriculture, environmental science, or geology.

This unit precedes Unit 2, which explores distinctions in basic soil properties between land use types. It can be completed individually and could also be used to prepare for a quantitative activity such as exploring the influence of Humans as Geomorphic Agents.

This unit is designed to use observations and thought questions to develop observational and critical thinking skills through small group work and classroom discussion.

Observation (15 minutes): Divide students into small groups of three or four and either give each group a stack of photos of each type of landscape or project Slides 8 and 9 for a few minutes each, switching back and forth several times during the small group work time. If slides are projected, the instructor may want to make one or two sets of the photographs available for close-up viewing. Provide each group with the student instructions and one response table:

Remind them to start by simply making observations without making any interpretations of their observations. They should then observe and list the physiographic features of the landscapes they are viewing.

Discussion (15 minutes): The students should then begin discussing their observations in small groups as follows:

(10 minutes) Bring the groups back together and encourage students to use the remaining time to describe their observations and interpretations of how the obvious physiographic impacts of agricultural land use compare to natural land. Follow with a classroom discussion of the impacts of different types of agriculture. Project Slides 8 and 9 during the discussion so that the class can view the photographs as they are being discussed. The Talking Points provided for this exercise include important discussions about soil erosion, sustainable agriculture, and systems thinking, including exploring the potential impacts of climate change on agriculture. Talking points for classroom discussion (pdf version) (Acrobat (PDF) 165kB Oct15 14); Talking points for classroom discussion (MS Word version) (Microsoft Word 2007 (.docx) 19kB Oct15 14)

Provide the following homework sheet or, if class time allows, complete this activity at the end of the classroom discussion. The purpose of this part of the exercise is to have to students look at the big picture to take what they learned and consider the various connections as Earth's spheres are all interrelated. The activity is provided as Slides 15 through 17 in the Landscapes PowerPoint™ for use in the classroom.

Photographs, separated by land use

Instructors can customize the module to focus on landscapes in their area by adding locally representative landscape photographs.

In addition, instructors should consider the following helpful hints while preparing for this unit:

With the instructor's help, the discussion—fueled by the talking points—should enable the students to begin understanding their observations in the context of the real world.

The objective observation skills and students' ability to compare and contrast agricultural with natural landscapes can be assessed by the instructor after collecting the response tables for review. The homework will allow the instructor to assess whether the students have been able to place what they have learned about landscapes, soil, and agriculture into the bigger picture of Earth's systems.

Answer keys are provided here for the Response Table and for the Homework. The keys are to be used not for exact answers to every question, but to give the instructor an idea of what to expect from students.