The second main way of using LCA is to assess which steps or process inputs in the production, consumption, and disposal of a product are most responsible for human negative impacts of practices. These "hot spots" in the analysis can then be the focus for better measurement to confirm the findings of the LCA and/or innovations in practices that eliminate these practices or limit their impact. One type of LCA uses the common measure of external energy inputs for food production (i.e., those not related to solar energy that is used by plants "for free") to analyze one aspect of the sustainability of food production. These energy inputs are visualized in Figure 10.2.5.

×
Figure 10.2.5. Principal human-managed energy inputs involved in food production, in addition to resources of soil and water as well as the solar energy captured by plants. Energy expended in irrigating crops, and in the growing of seed, would be additional flows that might be especially important in other systems. These energy flows are summed up using an LCA approach, noting which ones account for most of the impact, creating &quot;hot spots&quot; that should be researched further and targeted to increase efficiency and reduce the impacts of food production.
Credit: Steven Vanek

It's worth considering these results and the units used in more detail. First, for comparison, a typical U.S. home uses about 72 kWh per day for heating, cooling, and electricity, if we boil all these energy uses down to one energy equivalent* (calculations based on the U.S. Energy Information Administration, 2009 data). Some further "ballpark" or rough calculations allow us to see that the fertilizer-based system (bar at right) uses a total of about 100 days of mean household energy**to produce food on one hectare in a year (per year), while the organic system (bar at left) uses a little over half this amount of energy. Meanwhile, if we express this daily household energy use as the energy used for food per kg of food, the 72 kWh become 94 kg of food in the fertilizer-based case at right, and 144 kg of food in the organic management case at left ***. Expressing LCA results as energy per land area and energy per kg food produced are common approaches, analogous to the pollution impact analysis on the previous page. In the summative assessment on the next page, you will use an LCA to calculate energy inputs per kg of potato production in two systems.

* That is the amount of heat and light given off by 30 100-watt light bulbs burning for 24 hours.

** That is, about 7200 kWh (height of rightmost split bar on the left axis showing energy use per hectare), divided by about 72 kWh household use per day, which is equal to 100 days. 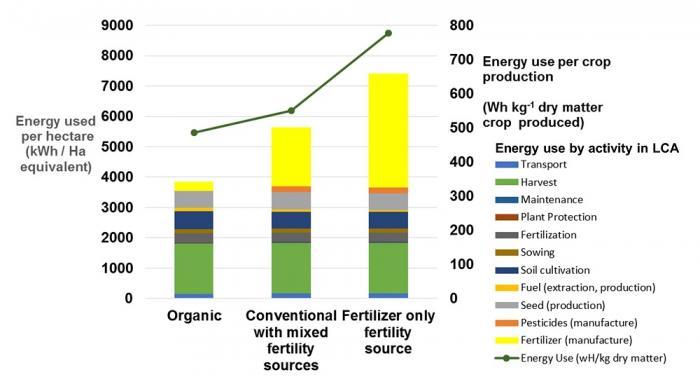 ×
Figure 10.2.6. Results from a life-cycle analysis on energy use equivalents to compare three farming methods growing a variety of food crops in a long-term research trial (DOK Trial, Therwil, Switzerland). The left Y-axis and stacked colored bars give the energy use per land area (i.e. per Ha or 100 x 100 m land area) and might be helpful to know if we have the total production land area of a farm or region. Meanwhile, the plotted points above each stack and right y-axis give the energy use per kg of dry matter of crops produced, which may be a more useful measure for a food system where we want to adjust for the productivity of different food systems. It is notable that the largest differences between the three systems derive from in the energy used to manufacture chemical fertilizer (yellow bars). Figure adapted from data cited in Nemecek, T. 2005. Life Cycle Assessment of Agricultural Systems: Introduction.
Credit: Adapted from data in the study cited in caption (Steven Vanek)

Fertilizer Use as a "Hot Spot" in the Analysis

Two additional observations: first, in this LCA there emerged large differences in energy use that have to do almost completely with the energy used to produce chemical fertilizer, especially of nitrogen fertilizers like those produced in the large fertilizer plant in India shown in Fig. 10.2.2. Energy inputs to fertilizer production are especially high for nitrogen fertilizer because it takes a great deal of energy to fix inert nitrogen in the atmosphere (N2) into reactive forms like ammonium and nitrate that can be easily taken up by crops (see module 5 and other previous modules). Fertilizer use emerges as a "hot spot" in this analysis and might prompt managers or policymakers to work towards reducing fertilizer use by incorporating aspects of the organic and manure-based system into the more conventional, fertilizer-based system. Many energy inputs in agriculture, such as these fertilizer inputs or tractor fuel that are tallied in the LCA above, are important to consider because they represent non-renewable fossil fuel energy sources that contribute to greenhouse gas emissions and anthropogenic climate change through the release of carbon dioxide. The LCA thus helps to measure natural system impacts and sustainability of food systems. Second, this LCA used energy as a yardstick to measure the impact of food production. As we will note for your summative assessment, such an LCA using energy inputs is only ONE measure of sustainability, and may not capture other measures of sustainability, like forest clearing needed to establish agroecosystems, runoff of nutrients that contribute to dead zones, pesticide effects on beneficial insects like pollinators, or whether farming practices provide sustained income and other livelihoods to farmers. As an example of using a different yardstick for LCAs, consider the emissions of greenhouse gases (GHG) by different pork production systems on the previous page, in which the organic management system, in fact, had higher potential to pollute waterways with phosphorus runoff per kg of pork produced, than either conventional or "best practices" red label standard in the European Union. This result contrasts with the favorable result shown on this page for organic management when energy inputs were used as a yardstick.