Students examine and analyze data to understand ENSO and to predict how local ecosystems and people will be impacted.

Constructing Explanations and Designing Solutions: Apply scientific ideas, principles, and/or evidence to construct, revise and/or use an explanation for real- world phenomena, examples, or events. MS-P6.4:

Weather and Climate : The ocean exerts a major influence on weather and climate by absorbing energy from the sun, releasing it over time, and globally redistributing it through ocean currents. MS-ESS2.D3:

The Roles of Water in Earth's Surface Processes: The complex patterns of the changes and the movement of water in the atmosphere, determined by winds, landforms, and ocean temperatures and currents, are major determinants of local weather patterns. MS-ESS2.C2:

In this unit students explore the El Niño–Southern Oscillation (ENSO) system as a pattern of ocean-atmosphere behavior. The activities require them to engage in analysis of ocean surface maps and reflect on the impacts of ocean surface oscillations on humans. The instructor can utilize the teaching collection here as a stand-alone day of instruction or as part of the complete Climate of Change InTeGrate Module.
Used this activity? Share your experiences and modifications

This unit is designed to function as one day of instruction in an introductory geology, meteorology, geography, or environmental science class. The lecture is customizable for different teaching needs (see notes below), and the activities can be done in class, completed together as a lab, or completed as part(s) of a lab, depending on time and topical needs. As a stand-alone teaching collection, it communicates information about ENSO in lecture instruction, introduces La Niña based on the basic mechanics of El Niño, builds knowledge of ENSO precipitation patterns, and links ocean surface anomalies to coastal and global impacts. In the Climate of Change InTeGrate Module, it follows the exploration of Pacific and Atlantic Ocean surface data in Unit 2 and precedes analysis of the Greenland ice sheet and connections between the ocean surface and glaciers in Unit 4.

The materials for this unit include a student reading, lecture, activities, and study guide. The lecture is optional. I recommend assigning the reading as preparation for class and using the lecture to lead a short discussion (or debrief students without the lecture) before beginning the activities in case students have questions on the reading. I designed the activities to develop understanding of ENSO and guide reflection. You can implement them in class, in lab, or as homework. I recommend that you complete at least one in class if you assign one as homework, so the students have an understanding of how to complete the tasks. 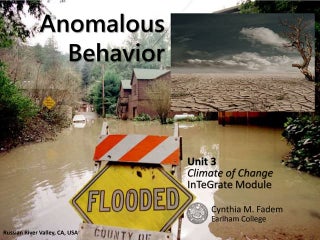 Some students will find these processes difficult to comprehend.

There are many resources listed below and on the associated activity pages to help you help your students conceptualize the oscillation.

The activities can be used formatively or summatively, although I recommend at least one be formative, so that students can develop their understanding, ask questions, and learn by trial in class with you and their peers. I conduct the activities as in-class group work, but they could be individual as long as students are provided enough reference material.

What is La Niña and why does it occur? Draw a diagram to illustrate your explanation and give an example of how La Niña has impacted people in a particular place and time.

Does this ocean surface anomaly map display El Niño, ENSO normal, or La Niña conditions, and how do you know? Where will precipitation fall if these anomalous temperatures remain in place?

Provenance: NOAA/NESDIS
Reuse: This item is in the public domain and maybe reused freely without restriction.

ENSO can become part of the geologic record through

A. flooding that leaves behind sediment deposits

B. flooding that scours away sediment deposits

C. drought-induced fires, which leave behind burnt soils and sediments

Of the following, all are components of ENSO except

To provide an opportunity for students to reflect on what they have learned in Unit 3 (and Unit 2, as well, if that was done prior to Unit 3), at the end of this unit, ask students to write on an index card one thing that they feel they have learned in this unit, or that seems particularly clear, and one thing that still seems confusing, unclear, or incomplete. Collect the cards, and use them to determine what aspects of the topic might need to be revisited in another class.

Students can also test their knowledge by completing the Unit 3 outcome tasks. These can be adapted in Blackboard/Moodle to a quiz or set of open-ended questions.