These student materials complement the Climate of Change Instructor Materials. If you would like your students to have access to the student materials, we suggest you either point them at the Student Version which omits the framing pages with information designed for faculty (and this box). Or you can download these pages in several formats that you can include in your course website or local Learning Managment System. Learn more about using, modifying, and sharing InTeGrate teaching materials.

Unit 3 Reading: From Anomaly to Oscillation

Once enough ocean surface temperature and pressure data are compiled and analyzed, we can distinguish the average, or "normal," condition of the ocean surface from abnormal or anomalous conditions. These anomalies represent departures from the normal condition, which—due to the connection between the ocean and atmosphere—cause variation in regional and global climates. The activities in Unit 3 take you on a tropical Pacific journey from ocean surface temperatures to their anomalies, and finally to the oscillation patterns that impact the lives and fortunes of people around the world. 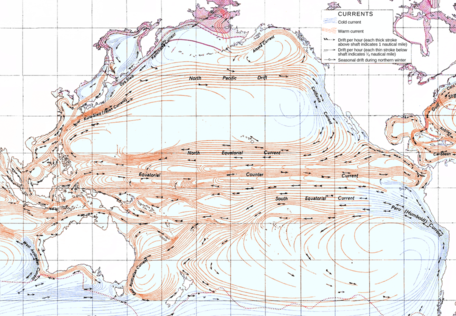 Provenance: http://commons.wikimedia.org/wiki/File:Ocean_currents_1943_for_colorblind_Pacific.png
Reuse: This item is offered under a Creative Commons Attribution-NonCommercial-ShareAlike license http://creativecommons.org/licenses/by-nc-sa/3.0/ You may reuse this item for non-commercial purposes as long as you provide attribution and offer any derivative works under a similar license.
At the end of this reading you should be able to:

Shifts in tropical Pacific SST and precipitation affect wind patterns over much of the globe. Normally trade winds and strong equatorial currents flow toward the west. This process, along with an intense Peruvian current, draws up cool water from beneath the surface of the ocean along the west coast of South America. As El Niño begins, the trade winds weaken, and the equatorial countercurrent strengthens. This creates Kelvin waves, surges of warm water moving eastward. When a Kelvin wave reaches the Americas, it divides and travels north and south along the west coast. The warmer water associated with the Kelvin wave affects local weather conditions along the west coast of the Americas, including an increase in the likelihood of precipitation in the tropics, and shifts in the mid-latitude jet streams.

Provenance: UN World Food Programme
Reuse: This item is in the public domain and maybe reused freely without restriction.
ENSO can have both beneficial and costly impacts in different parts of the world—often resulting in worldwide socioeconomic consequences (ranging from an increased flood risk in some regions of the United States to warm, dry conditions in others). The image below summarizes the global effects from a single El Niño event in 1997.

Case Study 3.1: Predicting Patterns: What Does La Niña Look Like?

Provenance: NOAA
Reuse: This item is in the public domain and maybe reused freely without restriction.
The El Niño-Southern Oscillation results from changes in the strength of the Pacific trade winds. Normally these easterly winds push the warm equatorial waters away from the west coast of South America, forcing deep, cold, nutrient-rich waters to be drawn up along the coast. This deep-water upwelling provides a habitat for the large fish communities that support coastal fishing economies. During El Niño years the trade winds are weakened, and the warm waters of the tropical Pacific flow back towards South America, preventing coastal upwelling. 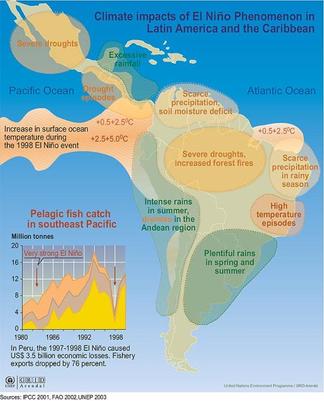 Provenance: Source: http://www.grida.no/graphicslib/detail/climate-impacts-of-el-nio-phenomenon-in-latin-america-and-the-caribbean_921c (UNEP/Grid-Arendal)
Reuse: If you wish to use this item outside this site in ways that exceed fair use (see http://fairuse.stanford.edu/) you must seek permission from its creator.
El Niño has many impacts throughout the region, including drought in the west and flooding in the east, along with decimation of the fish trade the upwelling supports.

El Niño itself is only one-third of what we call ENSO, or the Southern Oscillation. The other parts of ENSO are the normal condition and La Niña. El Niño is considered the positive condition, and La Niña the negative. (These do not mean "good" and "bad" though! Positive and negative just refer to the pressure states associated with the anomaly.) El Niño has a longer history of study than La Niña, but does not necessarily occur more often. 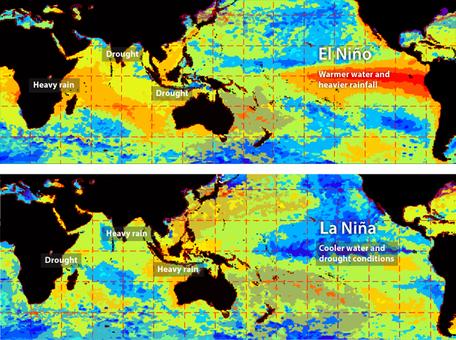 Provenance: NOAA
Reuse: This item is in the public domain and maybe reused freely without restriction.
The change ENSO causes in the distribution of heat energy across the tropical Pacific leads to changes in convection too. The location of precipitation in the region follows the hottest water, so strong positive anomalies mean flooding and strong negative anomalies bring drought to the affected areas. We have learned that ENSO has strong regional and global impacts. Flood, storm, and drought events around the world arise due to this oscillation in the tropical Pacific. The examples on the right show the ocean surface temperature anomalies for the negative and positive phases of ENSO, along with the predominant weather effects in the tropical Pacific and Indian Oceans.

×
Impacts of El Nino and La Nina on North America

Provenance: Climate Prediction Center (NCEP/NWS)
Reuse: This item is in the public domain and maybe reused freely without restriction.
To the right are depictions of how El Niño (ENSO+) and La Niña (ENSO‐) affect conditions in North America. You may have heard about such impacts on the news, which can include things like low water availability and crop yields, or increased glacial melt. Along with ENSO there are other ocean surface anomaly systems, like the North Atlantic Oscillation (NAO) and Pacific Decadal Oscillation (PDO).

Additionally, interactions between different ocean surface anomaly systems can cause the weather conditions we actually experience to vary from those we expect of the oscillation. For example, some expressions of NAO can be quite subtle, depending on the state of ENSO and its impact on the jet stream.

Provenance: NOAA ESRL
Reuse: This item is in the public domain and maybe reused freely without restriction.
Some oscillations reoccur in a regular time cycle (e.g., every 10 years or every 25 years), called a recurrence interval. Understanding the recurrence interval of a climate phenomenon can help us to plan for and mitigate its impacts. El Niño events usually occur every 2 to 7 years. The standardized departure is a measure of how severely an ENSO event departs from the normal condition.