Unit 6 Adapting to a Changing World

Students place their own climate "personality" in the context of the distribution nationally. They determine their own and their community's vulnerability based on data and evaluate different adaptation strategies.

Analyzing and Interpreting Data: Analyze and interpret data to determine similarities and differences in findings. MS-P4.7:

Constructing Explanations and Designing Solutions: Design, evaluate, and/or refine a solution to a complex real-world problem, based on scientific knowledge, student-generated sources of evidence, prioritized criteria, and tradeoff considerations. HS-P6.5:

Weather and Climate: Changes in the atmosphere due to human activity have increased carbon dioxide concentrations and thus affect climate. HS-ESS2.D3:

Earth Materials and Systems: The geological record shows that changes to global and regional climate can be caused by interactions among changes in the sun’s energy output or Earth’s orbit, tectonic events, ocean circulation, volcanic activity, glaciers, vegetation, and human activities. These changes can occur on a variety of time scales from sudden (e.g., volcanic ash clouds) to intermediate (ice ages) to very long-term tectonic cycles. HS-ESS2.A3:

Earth and Human Activity: Evaluate or refine a technological solution that reduces impacts of human activities on natural systems. HS-ESS3-4:

This resource has been reviewed by 2 review processes

In this unit, students assess individual and national opinions on climate change and explore strategies that communities are employing to adapt to aspects of climate change that are already affecting them and may affect them in the future. They will complete a survey on one's "climate change personality" and compare the class results to national results; distinguish between climate change mitigation and adaptation; and read brief case studies about the insurance industry's response to climate change, the "Room for the River" program in the Netherlands, and city planning for heat waves. Based on these examples and knowledge of their own community, they will suggest possible adaptation strategies that will be most beneficial to their area. The teaching collection here can be applied as a stand alone day of instruction or as part of the complete Climate of Change InTeGrate Module.
Used this activity? Share your experiences and modifications

Class size: can be adapted to serve a variety of class sizes.

Skills or concepts that students should have already mastered before encountering the activity: Students should have an awareness of the concept of anthropogenic climate change due to greenhouse gas emissions, as well as measured trends in greenhouse gas emissions (as studied in Case Study 5.2 of the Climate of Change module). Before coming to class, each student should have taken the "Six Americas" online survey and completed the social vulnerability survey.

This unit is appropriate for introductory geology, oceanography, meteorology, and other geoscience courses but could also be used in non-geoscience courses where climate studies are being introduced. It can be easily adapted to serve small- or large-enrollment classes and can be implemented in lecture and lab settings. It can be used on its own as an in-class activity, as a longer lab exercise when combined with Unit 5--systems@play, or as part of a multiday exploration of climate variability and climate change using the entire InTeGrate Climate of Change module. In the Climate of Change module, this unit follows Unit 5--systems@play on climate modeling and changes in atmospheric concentrations. The case studies can be implemented individually or together, depending on the desired learning outcomes and time constraints. 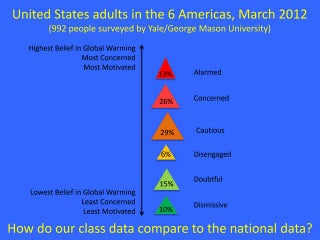 Click to view
Gallery walk questions:
Post each question on a piece of poster paper or whiteboard. In groups, students will be provided with a marker and copies of the climate adaptation case studies. Start each group at a particular topic, and after students have read the climate adaptation case studies for that topic, allow each group time to make notes under each question. After each group has visited each question, each group will verbally summarize, for the rest of the class, the information on the first poster that they visited. In low-enrollment classes, each group (depending on group size) could summarize the results of two questions. In high-enrollment classes, each group will likely summarize the results of one question.

Climate Adaptation and the Insurance Industry

(1) There are several methods that may be used to assess the climate adaptation gallery walk. General suggestions for formal and informal assessment of gallery walks are on the SERC website. Ultimately, students should be able to describe how the insurance industry is adapting to weather and climate-related policy claims; the flood adaptation steps being taken by the Netherlands; strategies used by cities of various sizes (Chicago, New York City, Wangaratta) to adapt to heat waves; and adaptive agricultural responses to drought. This could be assessed orally (for example, at the end of the class meeting as students summarize the answers to the posted gallery walk questions), as a short answer question on an exam, or as a written homework assignment.

This unit may not be as challenging for students to comprehend as some of the other units in the Climate of Change module, in that it does not involve comprehending system dynamics to the same degree. However, students may be surprised by some of the things they learn. They should be offered an opportunity to reflect on this at the end of the class period. Pose the question: What one thing that you learned in this class surprised you? And what one thing have you learned here that is most relevant to your own life?

Hot: Living through the Next 50 Years on Earth. Mark Hertsgaard, 2011.

Climate Change Is Here--and It's Worse Than We Thought. 8/12 Washington Post opinion article by James Hansen of NASA's Goddard Institute for Space Studies. This piece includes an effective description of Hansen's "climate dice" analogy to distinguish climate change from variations in weather.

Climate Change and the Insurance Industry

Wild Weather a New Normal and Insurance Companies Must Act


Insuring the Uninsurable: Swiss Re Breaks New Ground in Haiti and Senegal

Climate-Smart Agriculture: A Call to Practice

Creating an Evergreen Agriculture in Africa

Social Vulnerability Index for the United States from Hazards and Vulnerability Research Institute. Includes metadata, links to applications of climate-specific vulnerability data, and descriptions of determining factors for social vulnerability.

Exposed: Social Vulnerability and Climate Change in the US Southeast. 2009 Oxfam publication.

Why the US Drought May Be Felt Around the Globe, ~5.5-minute audio segment from PRI on global impacts of low US corn crop yield due to drought, 8/12.


Room for the River project currently being undertaken by the Netherlands.