Skip to Main ContentSkip to Navigation
Your Account
InTeGrate Modules and Courses >Climate of Change > Unit 3: Anomalous Behavior > Case Study 3.1 - Predicting Patterns: What Does La Niña Look Like?
Earth-focused Modules and Courses for the Undergraduate Classroom

Case Study 3.1 - Predicting Patterns: What Does La Niña Look Like?

Students examine and analyze data to understand ENSO and to predict how local ecosystems and people will be impacted.

Systems and System Models: Models can be used to represent systems and their interactions—such as inputs, processes and outputs—and energy, matter, and information flows within systems. MS-C4.2:

Weather and Climate : The ocean exerts a major influence on weather and climate by absorbing energy from the sun, releasing it over time, and globally redistributing it through ocean currents. MS-ESS2.D3:

The Roles of Water in Earth's Surface Processes: The complex patterns of the changes and the movement of water in the atmosphere, determined by winds, landforms, and ocean temperatures and currents, are major determinants of local weather patterns. MS-ESS2.C2:

This activity is designed to allow students who have been exposed to the El Niño-Southern Oscillation to analyze the La Niña mechanism and predict its outcomes. Students create an SST map for La Niña and both temperature and precipitation maps for the three states of ENSO. The exercise can be completed as part of the complete Climate of Change InTeGrate Module, Unit 3, or as a stand alone activity.
Used this activity? Share your experiences and modifications

During this activity students will:

My goals in creating this activity were to:

Prior to the activity some exposure to El Niño will be necessary. If you are using the rest of Unit 3, which includes lecture material, no additional instruction is necessary.

This activity takes roughly 30 minutes and can be used

In the first half of the activity, students demonstrate their knowledge and understanding of El Niño (ENSO+) and ENSO normal conditions by identifying their SST expressions. They then use ENSO mechanics to create a sea surface temperature map for La Niña. This exercise helps them to learn about La Niña as an expression of the ENSO system, rather than as a separate phenomenon.

In the second half, students create precipitation maps for all three ENSO conditions. This part of the activity will likely take a little more time, since they have to process the atmospheric connection between SST and precipitation in concert with three different expressions. Even if they have seen diagrams of ENSO including precipitation, students may have some difficulty making the appropriate connections. This exercise allows them to synthesize and evaluate what they have learned about climate and El Niño.

Questions embedded in the activity ask them to reflect on their projections and the nature of ENSO. Many of your students' responses will vary in both correctness and insight. Depending on the rest of your course material and students' experiences, you will have to gauge acceptability of some responses; so the instructor's notes are simply a guide and not a key.

The display version of the SST maps is available in case you cannot print student assignments in color.

There are further opportunities for reflection and synthesis if you complete both Unit 3 activities, as students will be able to compare their predictions from this activity with real SST anomaly maps from Case Study 3.2. 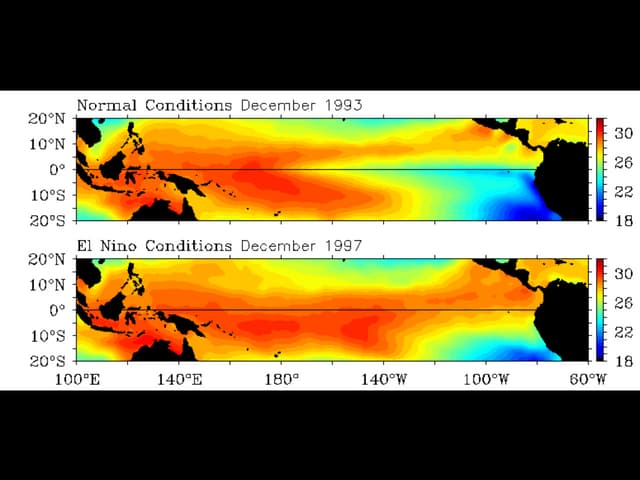 Some students may have difficulty projecting La Niña.

Depending on the rest of your course material and your students' experience, you may have to approach the projection of precipitation intensity differently.

You can use this activity formatively or summatively, but I recommend using it formatively if you are using only one of the Unit 3 activities. You can develop exam questions to assess this activity directly from the learning outcomes.