Supporting Minority Students at the University of California-Riverside

Information for this profile was provided by Gareth Funning, University of California-Riverside. Information is also available on the program website. 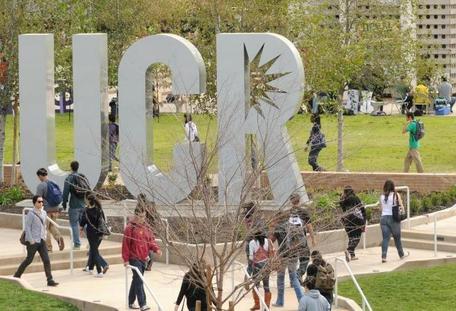 Provenance: From the UCR campus promotional website http://admissions.ucr.edu/visit-ucr/virtual-tours.html
Reuse: This item is in the public domain and maybe reused freely without restriction.

UCR is one of the most ethnically diverse universities in the US, ranked equal 12th by the US News & World Report in 2013. This situation reflects the commitment of the university to promoting and maintaining diversity, as well as the campus location within inland southern California. Many of our undergraduate students are recruited from within this diverse region. Overall, 38.4% of the undergraduate population in Fall 2012 identified as belonging to underrepresented ethic minorities (African-American, Latino/Chicano or Native American).

The Department of Earth Sciences at UCR has existed, in various guises, since the founding of the university in the 1950s. Today, we have 56 undergraduate majors in our Geology and Geophysics programs. The proportion of underrepresented minority students within our majors (38.2%) is very similar to that for the campus as a whole, although slightly lower than the percentage for all science majors at UCR (48.4%). As our undergraduate numbers have grown, from 30 in 2009, to almost double that today, the numbers of minority students have grown at an even faster rate, suggesting that our efforts in student recruiting and retention are being reflected in the diversity of our undergraduate population.

In recent years, faculty and students in Earth Sciences at UCR have worked hard to raise the profile of the Department within the local community through targeted public outreach. Participation in events such as the City of Riverside Long Night of Arts and Science, the establishment of an annual Climate Change Fair for K-12 students, hosted on campus, and a strong presence at campus recruitment events have coincided with a steady rise in freshman admissions to our undergraduate programs. In addition, the Geoscience Education Outreach Program, established in 2009, has taken our graduate and undergraduate students into dozens of local classrooms each year, running activities on geoscience topics such as earthquake safety, climate change, volcanoes, rocks, minerals and fossils.

We have also stepped up efforts to recruit undergraduate students internally, from the pool of students admitted to study science at UCR who have not declared a major. This has involved placing our most dynamic lecturers in our introductory classes (which contain a mix of majors and non-majors), running biannual recruitment field trips for interested students in those classes, employing students from related fields in laboratories, and encouraging the growth of an active and visible student geology club on campus. In some years, such efforts have resulted in as many as ten previously undecided undergraduates declaring a major in the geosciences.

Overall, these efforts have coincided with a near-doubling of our undergraduate student numbers in the last five years.

Probably the most important aspect of our student retention efforts has been the recruitment of a proactive undergraduate advisor (counselor). Through a mastery of the curriculum, and identification of potential roadblocks well in advance, the progress of our students through the geology and geophysics majors has been greatly eased. Improved lines of communication with the faculty undergraduate advisors concerning problems with class availability or clashes have also allowed us to forestall potential problems. These improvements have benefitted all of our undergraduate students.

At the college level, the implementation of a comprehensive learning communities strategy has started to show impressive results, with measurable improvements in GPA over students who did not opt into the program. Students (typically from the same major) are enrolled as a cohort into the same lab/discussion sections for a series of classes, through their freshman year, and provided with supplemental instruction. Anecdotally, we notice appreciable morale and togetherness among students who have completed a year in such communities.

Finally, there is strong support at the campus level for policies that enhance diversity. Maintaining diversity is a priority of our administration; it is part of the campus identity. The Chancellor of the university has been outspoken on the need for the diversity of the UCR faculty to better resemble the diversity of the student body. Major policy decisions concerning the student body (e.g. about admissions), are often weighed against the anticipated impact on diversity. In addition, active student-run support programs exist for multiple minority groups on campus, and foster community among students in those groups.

The geology major at UCR is a traditional geology degree, with a particular focus on instruction in the field. Our graduates are typically recruited to work in engineering/environmental geology jobs, although a significant minority (~15%) have entered graduate programs in the past three years. Anecdotally, the rigorous field training that our students receive has strong credibility with local employers, and is a major selling point of our graduates.

Provenance: Data sources: diversity.ucr.edu/statistics/statistics.html sara.ucr.edu UCR CNAS Advising Center
Reuse: This item is offered under a Creative Commons Attribution-NonCommercial-ShareAlike license http://creativecommons.org/licenses/by-nc-sa/3.0/ You may reuse this item for non-commercial purposes as long as you provide attribution and offer any derivative works under a similar license.