There are successful efforts to attract and support diverse students learning about the Earth in many institutions around the country. The profiles in this collection can serve as models and inspiration for departments and programs that aspire to broaden participation in the geosciences.

The browse below makes use of the US Federal Government's classifications of minority-serving institutions (MSI).

The federal government classifies US 2- and 4-year degree-granting postsecondary institutions which are eligible for federal student aid programs into seven mutually exclusive categories: 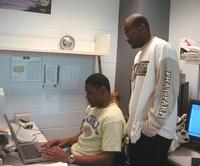 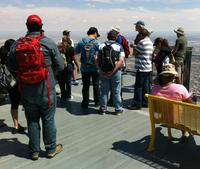 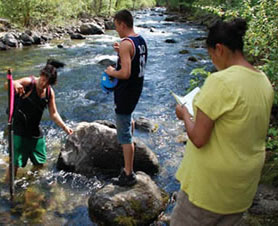 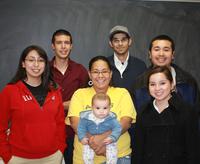 Temple University
The Math Mentor Program was developed at our large state-affiliated university as a mechanism to support students through the fundamental math courses required for the geoscience major. Math Mentors were junior or senior Geology or Environmental Science majors, and their role was to support students through development of study skills and support, not act as tutors.

University of California-Riverside
UCR is one of the most ethnically diverse universities in the US, ranked equal 12th by the US News & World Report in 2013. This situation reflects the commitment of the university to promoting and maintaining diversity, as well as the campus location within inland southern California. Overall, 38.4% of the undergraduate population in Fall 2012 identified as belonging to underrepresented ethic minorities (African-American, Latino/Chicano or Native American). The Department of Earth Sciences at UCR has existed, in various guises, since the founding of the university in the 1950s. Today, we have 56 undergraduate majors in our Geology and Geophysics programs.

Inter American University of Puerto Rico-Bayamon
Inter American University of Puerto Rico, Bayamón Campus (IAUPRBC) is a private, non-profit Hispanic Serving Institution. The IAUPRBC is the largest private institution of higher education in Bayamón, with an enrollment of more than 5,000 (92.4% undergraduate students). The IAUPRBC serves a broad spectrum of Hispanic students whose learning styles require a variety of experiences in and outside of the classroom. Many require tutoring in one or more basic skills. The student failure rate in gatekeeper courses stands at 57%, hindering advancement to upper level courses and increasing attrition among first and second year students. In response to these challenges, IAUPRBC have been developing activities geared to create the conditions for student-centered education, especially in traditional gatekeeper courses required in engineering, science, and technology programs. Faculty and infrastructure have been reinforced and undergraduate research has been promote as a key factor in STEM fields. IAUPRBC has been implementing distance learning courses and is committed to academic innovation. Currently, IAUPRBC houses an advanced technological infrastructure, with both Internet and Intranet capabilities, on a fiber optic backbone. There are over 600 workstations, with wireless access points strategically placed for users to connect to with their own portable computers. The Campus library has been transformed into the Information Access Center (IAC). A new database integrating all titles in the university system has been implemented and a virtual library can be accessed through the Internet and the university Intranet. Also, IAUPRBC has a Tutoring Center to help students on English, Spanish and Math skills and a "Internship, Exchange and Partial-Employment Office" to support students on their search for these activities to complete their education. The institution offers a Bachelor degree in Environmental Sciences and a Master degree in Environmental Sciences and Ecology.

Wayne State University
Support for our minority students is an integral part of both the Geology & the Environmental Science programs.

University of Arizona
The University of Arizona (UA) is located in downtown Tucson, Arizona. Tucson is the second largest city in Arizona and is situated about 100 km from the U.S.-Mexico border. Tucson has 500,000 people; the greater metro area has about 1,000,000. The population of Tucson is about 40% Hispanic or Latino, and this group is growing. For instance, in the Tucson Unified School District, Hispanics/Latinos make up about 60% of all students. The UA was founded in 1885 and was the first university in the Arizona territory (that's right, ASU). In the fall of 2013, the UA undergraduate enrollment was 31, 670 students. Approximately 39% of these students were from a minority (undifferentiated). The UA currently offers degrees in 334 fields of study. The Department of Geosciences offers undergraduate and graduate degrees. For undergrads, Geosciences has three tracks: Geology, Geophysics, and Earth Systems Science. There is also a minor in Geology. For grads, the department offers the M.S. and Ph.D. The department is ranked #1 in Geology, #7 in Earth Sciences, and #10 in Geochemistry in the most recent U.S. News and World Report national survey of graduate programs.

Stony Brook University
This M. S. in Geosciences Instrumentation operates within the graduate programs of the Department of Geosciences at Stony Brook, which include several M.S. tracks and Ph. D. track.

Purdue University-Main Campus
The majority of undergraduate students at Purdue University are from Indiana (57%) or surrounding states in the mid-west. Also, international students make up 17% of the undergraduate enrollment. The mid-western states have the lowest percentage of minority population of any region in the United States. Below are some statistics (2013-14) for undergraduate enrollment of the university. Purdue undergraduate enrollment: Male 16,843 (57.2%) Female 12,597 (42.8%) Purdue undergraduate minority enrollment: 16% of all undergraduates 19.4% of all U.S. undergraduates Purdue undergraduate underrepresented minority (URM) enrollment: 8.5% of all undergraduates 10.2% of all U.S. undergraduates Within Purdue's College of Science, there are 3319 undergraduates of which 2164 (65.2%) are male and 1155 (34.8%) are female. Demographic data for the Earth, Atmospheric, and Planetary Sciences (EAPS) department are shown below: EAPS undergraduate majors (2013-14) Male 70 (60.9%) Female 45 (39.1%) International students 12 (10.4%) Minority students 13 (11.3%) There are six undergraduate major programs within EAPS: Atmospheric Science/Meteorology, Geology and Geophysics, Environmental Geoscience, Planetary Science, Earth and Space Science Education, and Interdisciplinary Science (joint with other departments in the College of Science). The EAPS department was founded in 1967 in order to increase the coverage of science programs within the College of Science, provide degree programs in Earth and atmospheric sciences, and in recognition of the significance of the geosciences to societal issues into the future. The department was originally named the Department of Geosciences. The name was subsequently changed to the Department of Earth and Atmospheric Sciences and then to the Department of Earth, Atmospheric, and Planetary Sciences. There has been significant change in the EAPS demographics in the past 5 years. The percentage of female undergraduate students has increased from 27.2% in 2009-10 to 39.1% in 2013-14. Similarly, the percentage of international students has increased from 4.4% to 10.4%, and the percentage of minority students has increased from 5.2% to 11.3% in the same time period.

Mesa Community College
Mesa Community College serves over 40,000 students a year, 21% of whom are Hispanic. We have two different geoscience pathways for students to pursue, geology (in the physical science department) and geography (in the cultural science department). Both programs serve over 600 students a year, only a handful of whom self-identify as majors. There are no geoscience degrees, so tracking the number of majors is difficult, however there is a geology club that has an active membership ranging from 10-30 members in any given year.

Humboldt State University
Humboldt State University is the northernmost campus of the California State University system located on the rural north coast, ~300 miles north of San Francisco. Campus demographics are changing rapidly to better reflect that of California. As Fall 2013, HSU was eligible for recognition as an Hispanic Serving Institution. The Geology Department has ~110 majors, ~10 of which are MS students, ~85 Geology BS/BA, and ~15 Geology BA-Geosciences Option. The Geosciences Option was revamped from a Geoscience Education Option that never gained viable enrollments in part due to changes in the Education program.