« Back to Attract Minority Students

Jump Down To: In the Geosciences

According to NSF statistics, in 2012 just over 589,000 students graduated with Bachelor's degrees in STEM disciplines and just over 104,000 of them (17.7%) were underrepresented minority students. According to the U.S. Census Bureau, African Americans, Hispanics, and Native Americans/Alaska Natives collectively accounted for approximately 30.0% of the U.S. population in 2012. If these students were graduating in the same proportion to their share of the population, there would be 72,000 additional STEM graduates of color. The situation of minority students varies across degree type.

The fact that underrepresented minority (URM) students are close to proportional representation at the Associate's degree level across all of STEM in 2012 should be seen as a big win. In 2002, the percentage was 24.2, but the number of degrees granted grew by more than 21,000 overall in that decade and minority students still made up a larger percentage of awarded degrees than in 2002.

Progress was also made at the Master's and PhD levels. The number of URM students attaining these degrees grew faster than the total growth in degrees showing increases of a few percent over the decade (+2.9% and +1.7% respectively). Obviously more work is needed in this area to bring these percentages closer to being representative. 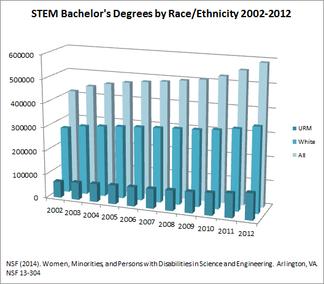 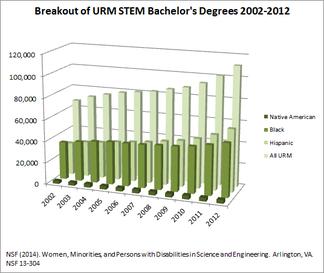 According to the same NSF statistics, of the roughly 589,000 students who graduated with Bachelor's degrees in STEM disciplines, just under 6,000 were in geoscience (1.0%). Of these geoscience degrees, only about 490 were students from underrepresented minorities (0.1%). With these communities constituting 30.0% of the U.S. population in 2012, the number of URM geoscience graduates lags far behind with only 8.3% at the Bachelor's level. This is up by almost 50% from the 5.6% it was in 2002, but it shows how far there is still to go.

Broadening out to look at all degree levels, underrepresented minorities made up similar, low, proportions of geoscience graduates in 2012:

Again, these numbers represent substantial improvement over the numbers from a decade before (3.4%, 5.6%, 4.1%, and 1.9% respectively), but leave much room for growth. 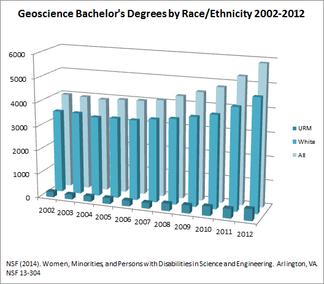 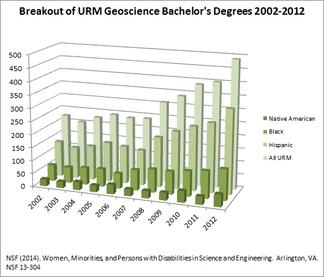