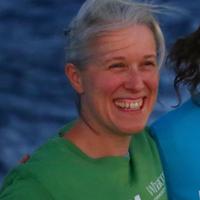 Kaatje van der Hoeven Kraft, Whatcom Community College
The 2014 Status of the Workforce report for the geosciences (AGI) projected a shortage of geoscientists for the workforce. In order to address this projected shortage, majors need to be considered from a more diverse pool. Two-year colleges (2YC) serve a diverse population and 45% of all undergraduates (AACC), as such, they are well situated to help address the increasing geoscience workforce demands. Geoscience is a discipline that draws great interest, but has very low representation of Underrepresented Minorities (URM's) as majors.
What affective-related factors influence a student's decision to major in the geosciences and are 2YC students different from research universities (4YU) in what influence these decisions? Structural Equation Modeling (SEM) was applied in an effort to predict a student's intent to persist in introductory geology. The targeted population was participants in the Geoscience Affective Research NETwork (GARNET) project, a national sampling of students enrolled in introductory geology courses.
Results from SEM indicated that interest was the primary predictor in a student's intent to persist for both 2YC and 4YU students. In addition, self-efficacy appeared to be mediated by interest within these models. Classroom pedagogy impacted how much interest was needed to predict intent to persist: as classrooms became more student-centered, less interest was required to predict intent to persist. Lastly, math self-concept did not predict student intent to persist, however, it did share variance with self-efficacy and control of learning beliefs, indicating it may play a moderating effect on student interest and self-efficacy particularly with 2YC students.
Implications of this work are that while 2YC and 4YU students are different in demographics and content preparation, student-centered instruction continues to be the best way to support student's interest in the geosciences across all institutions.