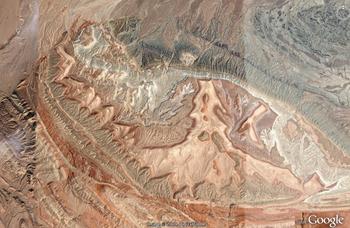 Because students are already familiar with the sawtooth pattern of inclined units in areas with topography, they start by adding strike and dip symbols to a printout of the area and sketch a cross section of the western portion of the area.

The Google Earth 3D view allows students to visualize the relationship between dip angle and the pattern of outcrop traces. Students work out why the outcrop patterns in the central and eastern portions of the area are so different from the western portion. Their introduction to map interpretation ends with a discussion of the outcrop pattern of horizontal and very shallowly dipping contacts. 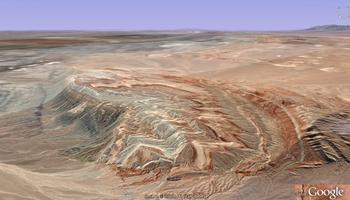 Students finish this introductory section on mapping by making a concept sketch of the map view (above) plus the oblique image (left) to document their understanding of the influence of contact dip and topography on outcrop patterns. 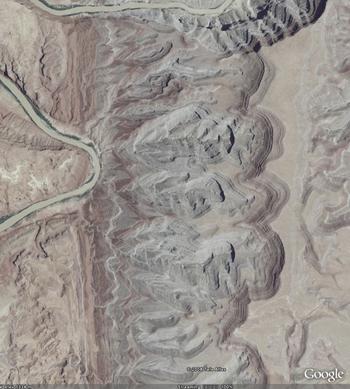 Click to enlarge.
Once students have a good visual grasp of units, contacts, outcrop patterns, and strike and dip, they are ready to use Google Earth to do more complex mapping. The Raplee Anticline (part of the Monument Upwarp) in southern Utah (right) is an ideal area for students to map and interpret complex patterns in relatively simple bedrock geology. 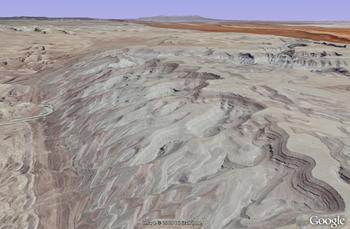 Click image to enlarge.
The change in dip from horizontal at the top to inclined at the base creates fantastic patterns that students normally find difficult to interpret in map view (right). Having the Google Earth 3D view (left) makes it possible for them to visualize how the contacts and topography interact. 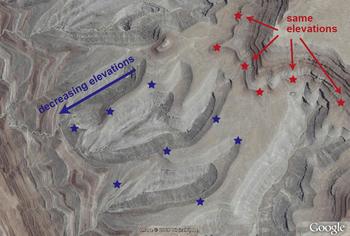 Click image to enlarge.
Students can also use elevations in Google Earth to convince themselves that some of the contacts are horizontal (the red stars on the image at left, for example, lie at approximately the same elevation) and others are inclined (the blue stars lie at progressively lower elevations to the west).

For homework, students define mappable units for the image at left, add strikes and dips, determine the age sequence of units, and create a cross section sketch.

Go to the next step: Visualizing folds