Teaching Structural Geology, Geophysics, and Tectonics in the 21st Century 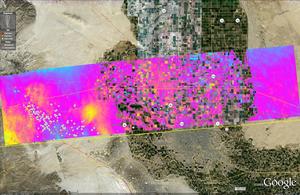 Hide
New NASA airborne radar images show the continuing deformation in Earth's surface resulting from the magnitude 7.2 temblor that rocked Mexico's state of Baja California and parts of the American Southwest on April 4, 2010, along with its thousands of subsequent aftershocks. The data reveal that some faults in the area to the west of Calexico, Calif., have continued to move at the surface, most likely in the many aftershocks that have occurred in this region. This fault motion is likely what is known as "triggered slip" on the faults, caused by stress changes in Earth's crust resulting from the large 7.2 quake rupture. Image credit: NASA/JPL/USGS/California Geological Survey/Google.

Applications: This workshop has already occurred.


Corner graphic is a Google Earth oblique view of the southern MacDonnell Ranges, Australia, looking SE from 24.27141S, 132.119593E. Imagery from Digital Globe.
This workshop is part of the On the Cutting Edge professional development program for current and future geoscience faculty, sponsored by the National Association of Geoscience Teachers with funding provided by a grant from the National Science Foundation Division of Undergraduate Education .