Systems Thinking in the Geosciences

The Earth is an integrated, complex system, composed of many complex, interacting subsystems: atmosphere, biosphere (including the anthroposphere), cryosphere, hydrosphere, and lithosphere. For our students to understand how the Earth works, they need to develop an understanding of systems behavior, including how these systems interact with each other (Ireton et al., 1997; Manduca and Kastens, 2012). It is insufficient to study each of the components of the Earth system independently, because "the system behavior that emerges from the interaction [is] unpredictable from an isolated understanding of the individual parts" (Stillings, 2012). This is precisely because of the characteristics of complex systems, including feedback loops, strongly interdependent variables, and non-linear interactions: in a complex system, the whole is not simply the sum of its parts. Moreover, understanding complex systems is fundamental to understanding "the complex challenges that lie at the intersection of Earth systems and human interactions [....] such as climate change, energy, population dynamics and resource use" (SERC, Teach Systems Thinking). 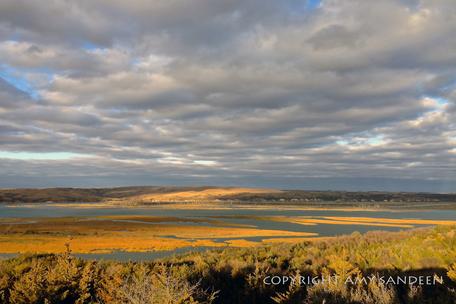 ×
There is a complex interplay between surface water evaporation, cloud formation, and atmospheric temperatures; see text for discussion. This image is from the confluence of the Niobrara and Missouri Rivers in northeast Nebraska. Photo by Amy Sandeen.

In many ways, systems thinking is counter-intuitive. It requires students to "overcome a natural preference for plausible, unitary causal mechanisms" (Stillings, 2012). For example, consider the effect of evaporation on the amount of water in the atmosphere. On the one hand, evaporation from surface waters leads to an increase in cloud cover, thus reducing the Earth's albedo, which would be expected to decrease the amount of surface water evaporating. On the other hand, evaporation from surface waters also leads to an increase of water vapor in the atmosphere, which contributes to the greenhouse effect, increasing atmospheric temperatures, which would be expected to increase the amount of surface water evaporating. Furthermore, complex systems often exhibit extreme sensitivity to initial conditions, time lags in response to perturbations, and emergent behaviors that are not apparent from a casual examination of system components (Stillings, 2012). This is why geoscience students need to learn about complex systems explicitly: systems behavior defies intuition.

Earth and environmental science curricula are shifting their foci toward the "grand challenges" facing our planet (NRC, 2001), and chief among these is climate change (Stillings, 2012). The Earth's climate system is a complex interplay between all of its subsystems. As sentient beings, humans have the unique opportunity to make choices about how we affect Earth systems. But in order to make informed choices, we need first to understand these systems.

Manduca, Cathryn A. and Kim A. Kastens (2012). Mapping the domain of complex earth systems in the geosciences, in Kastens, K.A. and Manduca, C.A., eds., Earth and Mind II: A Synthesis of Research on Thinking and Learning in the Geosciences: Geological Society of America Special Paper 486, pp. 91-96.

Stillings, Neil (2012). Complex systems in the geosciences and in geoscience learning, in Kastens, K.A. and Manduca, C.A., eds., Earth and Mind II: A Synthesis of Research on Thinking and Learning in the Geosciences: Geological Society of America Special Paper 486, pp. 97-111.