This web page is based on a document produced by Federica Raia, Noelle Selin, Cailin Huyck Orr, Nikki Strong, Lynn Fichter, and Bruce Herbert at the 2010 workshop on Developing Student Understanding on Complex Systems in the Geosciences. 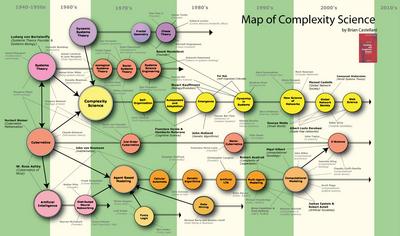 Hide
Conceptual and historical overview of complexity science. This image is from the Art & Science Factory website. Click on the image to view a larger version.
The study of complex systems is an emerging discipline that has not developed a consistent theoretical framework on par with the major theories that frame the study of the geosciences, such as plate tectonics, evolution, mechanics, and thermodynamics. There are a wide range of geologic systems that exhibit complex behavior including soils, drainage basins, earthquakes and tectonic systems.

Complex systems have been studied from a wide range of mathematical, scientific and engineering perspectives. Therefore, a range of definitions have been developed to define and describe complex earth systems. Some of these definitions are below: