Resources in this top level collection a) must have scored Exemplary or Very Good in all five review categories, and must also rate as â€œExemplaryâ€ in at least three of the five categories. The five categories included in the peer review process are

Students use a physical model, computer simulation, examples from the natural world, visualizations, and overarching thought experiments to explore this phenomenon. Exsolution embodies attributes of a complex system by exhibiting self-similar features on many scales, and emergent, self-organizing and fractionating properties.
Used this activity? Share your experiences and modifications 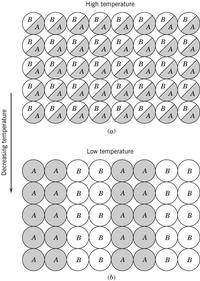 Hide
Illustration showing a) complete disorder in a two-component system (every site has an equal chance of containing element A or B; top picture), and b) perfect ordering (segregation) of components A and B into specific sites (bottom picture). From: Klein, C., and Dutrow, B., Manual of Mineral Science, 23rd ed., J. Wiley and Sons. Used with permission.
This exercise illustrates how intracrystalline diffusion works to create compositional segregations in crystalline solids, a process called exsolution.This exercise can be used in an introductory mineralogy course (sophomore level) or related courses in chemistry, solid state physics or materials science.

Students should have a fundamental understanding of crystalline solids (e.g. minerals, metals, alloys), crystal structures, and compositional variation in solids (i.e. solid solution). An awareness of phase equilibria as a function of intensive parameters (e.g. temperature and pressure) is also required.

This activity is designed as a stand-alone exercise to be used in a laboratory section of the associated course to introduce the concept of exsolution, model intracrystalline diffusion as a process, and demonstrate how the process operates. Photos of natural examples of exsolution as developed as perthite in alkali feldspars are included. Traditional approaches in a mineralogy class typically describe "what" perthite is, and perhaps "how" it formed via unmixing of different components. However, deeper exploration of complex-system behavior further explains "why" this process occurs in terms of self-organizing criticality and fractionating behavior.

The use of multiple representations of a phenomenon (exsolution) are used to provide different perspectives to foster more complete understanding. Students must be able to integrate information provided by: 1) physical samples (manipulatives), 2) a kinesthetic/physical modeling activity, 3) plots of data to derive a mathematical model of the process, 4) a computer-based simulation model, and 5) a visualization that represents the physical process of exsolution in a T-X phase diagram (alkali feldspar solvus). This activity makes the connection between a physical phenomenon that occurs in nature with model-based representations of complex-system behavior. 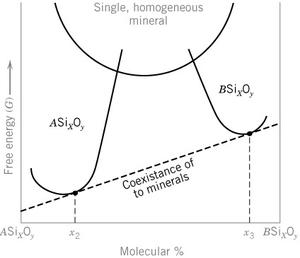 Hide
This diagram shows the relationship of Gibbs Free Energy to composition. In this diagram there are two minima represented for free energy which is achieved by unmixing of two distinct phases each with definite composition. The dashed line, which is tangential to the two minima in the free energy curves, gives the composition of the coexisting minerals at a specific temperature. From: Klein, C., and Dutrow, B., Manual of Mineral Science, 23rd ed., J. Wiley and Sons. Used with permission.
The phenomenon of solid solution is common in many rock-forming minerals. At high temperatures, thermal vibrations permit accomodation of ions with size differences on the order of 15-30%. However, as physical conditions change, ions no longer fit into similar sites which creates internal (lattice) strain energy. Consequently, the mineral composition must adjust to relieve this strain energy and minimize the Gibbs Free Energy of the system. One possible response of the system is for elements in a crystal to move from one chemical site to another via intracrystalline diffusion. This results in segregated domains that are enriched in one element or another--this is a process called exsolution.

A good example of this process can be seen in the alkali feldspar mineral group. At high temperature the mineral anorthoclase (K,Na)AlSi3O8 shows complete solid solution, i.e. there is a random distribution of K and Na in the alkali sites of the crystal. Upon cooling, Na and K segregate into more ordered domains creating areas that are rich in albite NaAl Si3O8 and microcline KAlSi3O8(see Figure 1).

The purpose of this exercise is to provide a number of activities to demonstrate how exsolution works and to demonstrate complex-system behavior in this relatively common natural phenomenon.

The following images show minerals that have undergone exsolution at different scales. The image on the top left shows exsolution as viewed with a Transmission Electron Microscope (TEM; field of view is 10 microns). The image on the top right is a photomicrograph of exsolution in microcline as seen in thin section (cross-polarized light, field of view is 2 mm). The picture on the bottom left is a hand sample of perthitic microcline as seen in hand sample (field of view is 10 cm). The picture on the bottom right is a picture of plagioclase feldspar showing the "schiller" effect. This is caused by sub-microscopic unmixing of two distinct plagioclase phases in the compositional range of labradorite (An50 - An70) which results in the beautiful play of colors seen in this photo; (field of view of 20 centimeters). This series of pictures is a good example of scale invariance of this physical phenomenon.

Examine perthite textures from hand samples and thin sections from your own mineralogy collection. We can easily envision unmixing of two immiscible fluids--for example oil and vinegar salad dressing. The same thing happens when we unmix (i.e. exsolve) solid phases--the process just takes a bit longer as atoms have to migrate in the crystal lattice by intracrystalline diffusion! How can such a common feature as perthite be understood in terms of complex-system behavior? 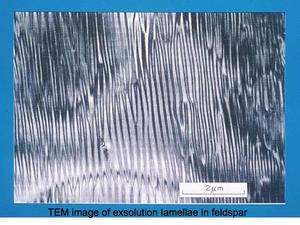 Perthite observed in thin section. Field of view is 2 mm. 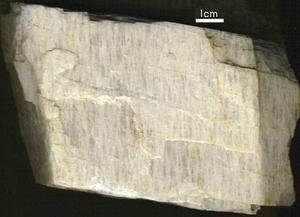 Perthite observed in hand sample. Field of View is 10 cm. 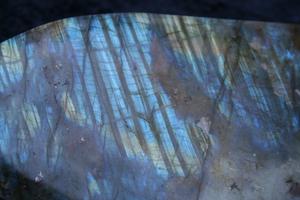 Unmixing of parallel lamellae, as observed in a hand specimen of labradorite from Madagascar. These lamellae act as diffraction grating for white light, producing spectral colors known as labradorescence or the "schiller effect"; the field of view is 20 cm. Photo by B. Dutrow; used by permission.]

This exercise is done in groups of 2-3 students. Coins are initially randomly distributed on a chessboard, and are then subsequently moved to create domains of increasing order (regions that are dominated by either pennies or nickels). This is a kinesthetic learning exercise that creates a physical model that simulates how the exsolution process works. (Inspired by Greg Marfleet, Carleton College)

Here is an example experiment showing the progressive ordering of pennies (potassium) and nickels (sodium). 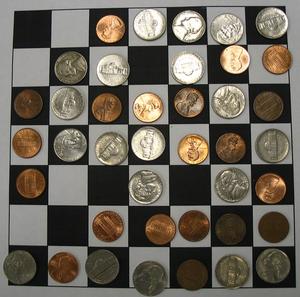 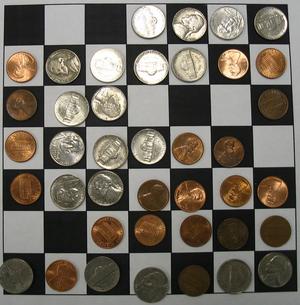 Distribution of coins after 10 moves. 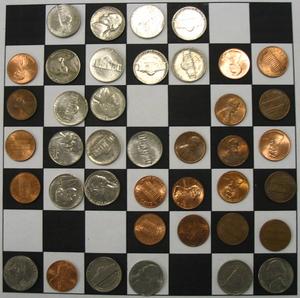 Distribution of coins after 20 moves. 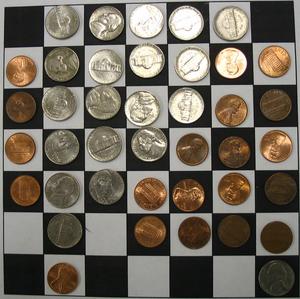 Distribution of coins after 30 moves. 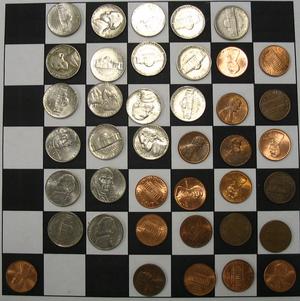 Distribution of coins after 40 moves. 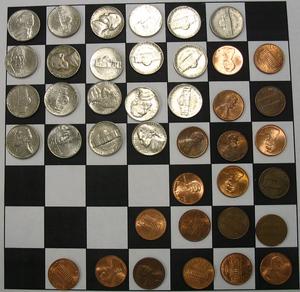 Distribution of coins after 50 moves. 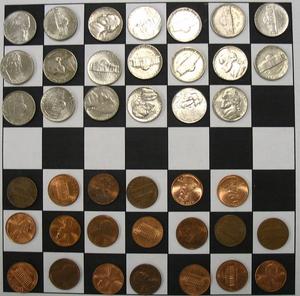 Plot your results. Assume that each move requires 1 unit of time.

The rate of transport of mass (and energy) through a fixed medium can be described mathematically by Fick's Law of Diffusion.

The fundamental expression of Fick's First Law of Diffusion can be written as:

Note that generally material tends to move in a direction from high to low concentrations, and thus, compositional gradients tend to be minimized by diffusion. However, in the case of exsolution and perthite development during cooling of a high-temperature, homogeneous alkali feldspar (anorthite), just the opposite effect happens--segregated domains of albite and microcline become more stable at lower temperatures. Why is this the case? The answer lies in the overall energetics of the system. It turns out that lattice strain that is induced upon cooling of anorthite results in large excess energy in the system. To minimize this excess energy, a single homogeneous grain of anorthite (stable at high temperature), will undergo "spinodal" decomposition upon cooling. This results in two energy minima, one for each phase, as illustrated in Figure 2. Upon further cooling, these energy minima continue to separate, thus resulting in two stable phases whose compositions increasingly approach the end member compositions of albite and microcline. A more complete description of this process can be found in Chapters 5 and 7 of Putnis A. and McConnell J.D.C. Principles of Mineral Behaviour 258pp. Blackwell Scientific Publications. Oxford. 1980. 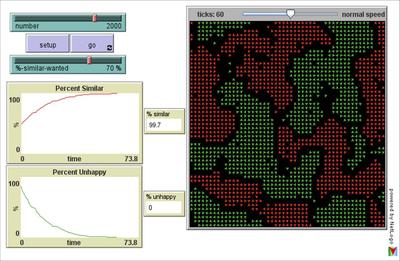 Model output from the NetLogo "segregation"program; 2000 objects achieved 70% similarity.
The computer program NetLogo can be used to model complex system behavior. This computer program was developed by Uri Wilensky (1999) at the Center for Connected Learning and Computer-Based Modeling, Northwestern University. Evanston, IL. For this exercise, we will use the pre-programmed function for Segregation

Part IV: Visualization of the Development of Exsolution 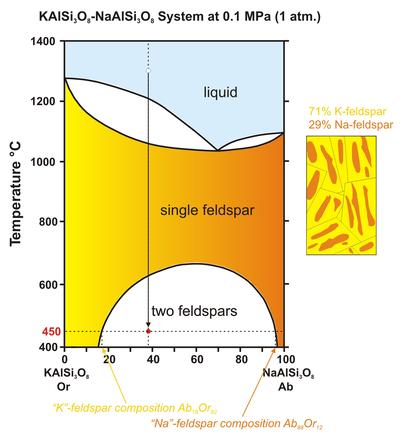 The binary solvus phase diagram for the alkali feldspar system at low pressure. Figure provided by Dexter Perkins, used with permission.
The binary "solvus" phase diagram (showing the relation of temperature to composition) is typically used to show the phase relations for alkali feldspars. A single homogeneous alkali feldspar occurs at high temperatures (Figure 1a), but as the system cools eventually the phase boundary (solvus) is intersected and the exsolution (unmixing) process begins. "Underneath" the solvus a single feldspar is no longer thermodynamically stable, and the system begins to separate into two phases that become increasingly Na-rich or K-rich upon further cooling. This visualization demonstrates the cooling history of an alkali feldspar, including use of the "lever rule" to calculate phase composition (mineral) and relative proportions. Examine the accompanying illustrations and track the "state" of the system as temperature changes. Binary Solvus for the Alkali Feldspar System. The accompanying illustrations on the right show the "state of the system" in terms of the relative proportions of the phases present for each assigned temperature.

Relate these products and processes to natural occurrences of perthite, and think about the changes that have to take place on the atomic scale to produce the mesoscopic features that are visible in hand samples.

References for Further Exploration of Exsolution and the Development of Perthite

Geochemistry resources from across Teach the Earth »

Geochemistry resources from Teach the Earth include:

Minerals resources from across Teach the Earth »

Geochemistry resources from across Teach the Earth »

Geochemistry resources from Teach the Earth include:

Minerals resources from across Teach the Earth »