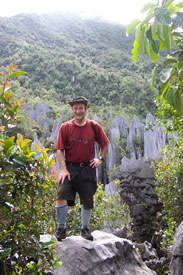 Quiz: where was this photo taken?

Hide
The Pinnacles in Sarawak province of Borneo - photo taken in November 2006.

The power of first impressions and affective experiences is underestimated but is crucial to recruitment and retention of students in geoscience and otherfield sciences. I'd like to investigate first classes, first weeks, and first semesters of students as a key to optimizing interest.

My co-expertise with geoscience is faculty development (about 17 years experience). The state of not recognizing one's own affective influences in choices results because these are often unexamined or presumed to be purely cognitive. The affective domain is communicated non-verbally, and professors unaware of their own affective status are ill-prepared to lead the affective domains of their students. I would contribute by distributing a self-reflection exercise to participants by email ahead of the conference and utilize that in an interactive workshop with participants.

James Rhem, founder and editor of National Teaching and Learning Forum, was the first person to get me thinking seriously about the importance of the affective domain on the process of becoming educated. My finally internalizing the importance of the affective domain on professors' ability to teach and students' ability to learn was a breakthrough for me in understanding how to replace fear, low confidence, and apprehension with interest, enthusiasm, and fascination. It proved equally as important to faculty development as to student education. Utilizing the affective domain to benefit involves creativity of a kind that is often not developed in higher education-at least in that of scientists. It involves attention to things such as light and color of classrooms, the benefits of starting a class with music, and thinking of enacting instruction in our classrooms in much the same ways we think of welcoming guests into our living rooms.

Often, one will find seniors and juniors in introductory courses because fear and apprehension led to these students trying to escape fulfilling the science requirement until the last possible semesters. These students hardly feel welcome in the environment they perceive is about to befall them. Their feelings may result from bad experiences in K-12 classrooms and/or negative misconceptions about science and scientists perpetuated by the popular entertainment and media industries. From what are admittedly only my personal experiences from speaking with my tutors and students from other countries, the particular fear of science and mathematics is more prevalent in Americans than in other cultures. Fear and distaste are part of the affective domain but are not natural reactions or spontaneously generated feelings. Affective feelings acquired in specific ways become inextricably associated with specific cognitive material. When negative, they present challenge to both students and instructors. The strength of erroneous scientific preconceptions demonstrated in the "Private Universe" project in 1987 showed the incredible tenacity of preconceptions and their resistance to modification. Successfully overcoming these requires replacement of a neurological network that holds unproductive concepts with a better network, rather than trying to coax an old network into functioning correctly. Interactive engagement design that involves the cognitive, affective and psychomotor is effective. Lecturing that attempts to address only cognitive content while "steering clear of that touchy feely stuff" is not surprisingly, ineffective, because the latter tries to cause change by using less of the brain than was used to form the misconception. There are good cognitive explanations for interactive engagement in groups consistently producing better understanding of concepts than does lecture, but there are also good affective reasons that include increased feelings of support generated by nonverbal cues, development of friendships, satisfaction of contributing, more opportunities for ownership and power to act, and less fear of humiliation for "being wrong." The "thin slices" research of the early 1990s confirmed the power of the affective domain in initial experiences' shaping of students' evaluation and satisfaction with their longer-term educational experiences. This lasting power came mainly from affective, rather than cognitive influences. To a fractal thinker, it reveals why we need to employ the affective domain early in our classes, courses and curricula.

(by Edward B. Nuhfer, Center for Teaching and Learning, Idaho State University)
This article provides useful background on the relationship between the cognitive and affective domains and encourages faculty to recognize that the affective domain is "legitimate, powerful, and even useful." The paper describes several examples of how one's affective teaching can be improved, which may result in increased self-awareness, a more positive classroom environment and a better connection with students. This article is from The National Teaching & Learning Forum, Volume 14, Number 5, September 2005.


Some Aspects of an Ideal Classroom: Color, Carpet, Light and Furniture