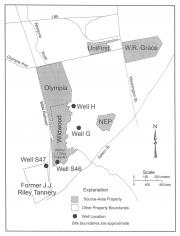 These photographs were taken by Professor Scott Bair during a 2000 field trip to see the contaminant remediation systems. The site visits were arranged through U.S. EPA Region I. Jonathan Harr, Jan Schlichtmann, John Guswa, Gretchen Latowsky, and Chuck Myette were also part of the entourage that heard employees of ReTec, W.R. Grace, Harvard Project Services, and U.S. EPA explain the function and operation of the remediation systems at four of the eight contaminated properties within the Superfund Site. A detailed explanation of the remediation systems in the Wells G & H Superfund Site is presented in (Bair and Metheny 2002 ).

The remediation systems at the 15-acre woodland, which is now known (ironically) as Wildwood Conservation Trust, contains 5 deep wells, 24 air sparging wells, and 1500 linear feet of perforated soil-vapor extraction pipe buried in a 3-foot thick gravel bed covering 3 acres adjacent to the river. In its first three years of operation it recovered 2260 lbs of VOCs.

One of five extraction wells

The remediation system at W.R. Grace contains 22 pump-and-treat wells that together yield 5-8 gpm and treatment with peroxide, UV oxidation, and carbon filtration. The system began operation in 1992. In the first nine years of operation, 31 million gallons of groundwater were extracted from the underlying glacial sediments and bedrock, and 66 lbs of VOCs were recovered from the contaminated water.

Extraction wells in vaults on southside of WRG buildings

Treatment building in back of WRG property

The remediation system at UniFirst became operational in 1992. It uses a 190-foot deep bedrock well to capture contaminated groundwater that is treated with peroxide, UV oxidation, and carbon filtration. In its first nine years of operation, it recovered 1731 lbs of VOCs from 193 million gallons of contaminated water.

This simple pump-and-treat system has a small footprint in the parking lot behind the former NEP building. The system has six air sparging wells and seven soil-vapor extraction wells. In 15 months operation it recovered 80 lbs of VOCs.

Other Contaminated Properties in the Superfund Site

Several other properties with groundwater contamination are present within the 330 acre area comprising the Wells G & H Superfund Site. Collectively these are known as the 21E Properties and include Murphy Waste Oil, Aberjona Autoparts, and Whitney Barrel. All three of these properties occur on the north side of Salem Street west of the Aberjona River within the buried valley. Characterization studies are proceeding on these properties. Remediation designs and construction are not yet known.