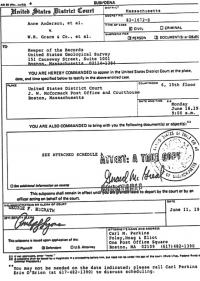 The trial documents listed below can be downloaded to read the original complaints, amended complaints, attorneys opening statements, closing arguments, Judge Skinner's charge to the jury, to see what a subpoena looks like, and to view field maps and exhibits presented in the actual trial. These files are listed in chronological order.