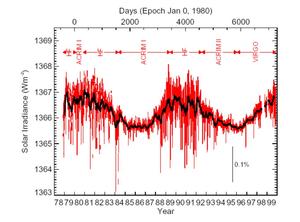 The composite solar cycle shown above as measure by several satellite based instruments is a classic example of periodic data, **see References for Frohlich and Lean below. {click each image to enlarge it} 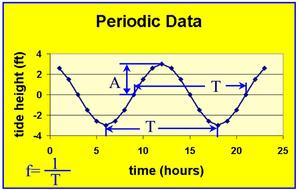 Of particular interest for periodic data are the:
The example above shows that: the amplitude is the maximum displacement from the average displacement, the period is the time it takes for the signal to repeat the cycle, and the frequency and period are reciprocals of each other.