"[Educational reform] works better when individuals or groups working in local settings are connected to a network of others who are also involved in similar efforts. Through such networks, innovators can support one another and help resolve issues of implementation, motivation, and ownership. Networks can also provide the leadership needed to create and sustain change in particular settings." Adrianna Kezar in "The Path to Pedagogical Reform in the Sciences: Engaging Mutual Adaptation and Social Movement Models of Change," Liberal Education 98(1)

The following three organizations support faculty working to advance quantitative reasoning (QR) instruction in a variety of disciplines and ways. Many people are active in all three groups simultaneously. 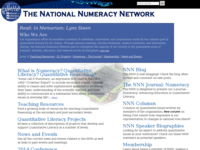 ×
National Numeracy Network (NNN): The NNN welcomes and supports all individuals "united by the common goal of quantitative literacy for all citizens." The NNN email list offers members a venue for sharing teaching ideas and asking others for advice. Through its annual meetings and open-access journal, Numeracy, the organization supports scholarly conversation around the practice and teaching of QR.

×
Special Interest Group of the Mathematical Association of America--Quantitative Literacy (SIGMAA QL): SIGMAA QL is a sub-group of the Mathematical Association of America (MAA) and is open to all MAA members. The group holds meetings in conjunction with MAA conferences, gathers resources to support QR instruction, and spearheads the MAA's work to promote QR more broadly.

×
Project Kaleidoscope (PKAL): PKAL fosters evidence-based, community-supported educational reform in science, technology, engineering and mathematics (STEM). In 2010 PKAL joined with the Association of American Colleges and Universities (AAC&U). In recent years, PKAL has worked to expand the STEM-related lessons of QR across the curriculum in conjunction with the AAC&U's LEAP initiative which aims to promote core undergraduate learning outcomes including QR.