It is fascinating that many questions of interest to economists are also examined by other disciplines. For instance, political scientists are interested in the impact of trade between countries, and scholars in the field of education investigate what determines the level of schooling people complete. Ecologists and Epidemiologists investigate the impact of environmental degradation on health, although they may not refer to this development as a negative externality.

When Neil Rudenstein was president of Harvard he asked the faculty to envision a University organized around questions rather than departments. He imagined various buildings on campus that would house faculty, regardless of their current departmental affiliation, with common interests such as: the well-being of children, peace, technology and life, or water. He initiated this conversation to emphasize his belief that examining issues from multiple perspectives and integrating insights from across disciplines &acirc;&#128;&#147; interdisciplinary thinking &acirc;&#128;&#147; would lead to a deeper understanding of the issues that we find perplexing. Within this spirit, economic research and instruction is becoming increasingly interdisciplinary.

Why Use Interdisciplinary Teaching in Economics?

The discipline of economics is a behavioral science primarily concerned with the production of goods and services and the allocation of scarce resources to promote social welfare. Economists typically examine questions that are also being investigated in other disciplines, but with different analytical frameworks and methodologies. Thus an interdisciplinary approach that fuses knowledge and insights from other disciplines with an economic framework of analysis to form a more inclusive means of examining questions will foster a richer, more productive, discourse.

Some examples where an interdisciplinary perspective might be useful in exploring issues of interest to economists would include efforts to understand the causes and consequences of; joblessness, pollution, educational attainment, and health care. All of these issues have psychological, sociological, moral, and political dimensions for which a market framework may not be sufficient means of exploration.

Show more on why economics instruction lends itself to interdisciplinarity

Hide
Many students select economics as a field of study because they hope to advance their decision making or problem solving skills. Since researchers find that interdisciplinary instruction leads to such cognitive gains, learning that entails economic analysis conducted in an interdisciplinary manner is an ideal way to acquire this critical skill. Moreover, a challenge students face as learners is that they arrive in the classroom with preconceived notions. The fusion of ideas from economics and other disciplines is an ideal way to formulate rich insights into complex problems and to interpret evidence and thereby overcome the preconception barrier to learning.

Colander and McGoldrick (2010) prepared a book for the Teagle Foundation on the status of the economics major and its contribution to the liberal education of students &acirc;&#128;&#147; the accumulation of broad knowledge, transferable skills, and a passion for learning. They assert that economics courses should help students develop their capacity to think critically, integrate insights from the full range of courses they have taken across the curriculum, explore "big think" questions, and account for moral and ethical dimensions of issues &acirc;&#128;&#147; the fundamental features of interdisciplinary learning. 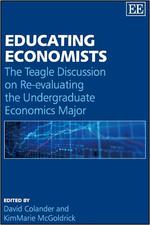 However, most economics professors teach students "how to think like an economist," which in their view became narrow and highly technical over the course of the past few decades. They believe this is the case because the material economics professors teach and the manner in which they teach are heavily influenced by the nature of their research, which has become both inward looking (i.e., discipline specific) and grounded in high level mathematics and statistics. Fortunately, economic research that accounts for insights from other disciplines, while maintaining its technical status, has increased markedly in recent years, especially among younger scholar educators. This development has substantially increased opportunities for economics majors to learn how to approach issues in an interdisciplinary manner. In their view, as scholarship in economics that draws on ideas from related disciplines becomes commonplace more economics educators will teach in an interdisciplinary fashion.

A number of economic research studies are now drawing on insights from other disciplines to inform their efforts to understand a wide range of questions. This development suggests that in the research sphere, economists believe the gains of interdisciplinary evaluation are greater than the costs. A number of examples will serve to illuminate the breadth of interdisciplinary research that economists are engaged in, and serve as a signal that economics instruction benefits from the integration of ideas from other disciplines, and the gains likely supersede the costs.

These examples offer a flavor of the types of questions economists are examining in an interdisciplinary manner and reveal that the notions integrated from other disciplines are leading to new insights that would have been undiscovered if a discipline specific approach was adopted.