Seasons and Why the Equator is Warmer than the Poles

The guided-discovery activity described here helps students confront and overcome both of these common misconceptions as it guides students toward an understanding of how and why the angle of incident sunlight determines the intensity of the solar energy that strikes the ground and hence how the angle of incident sunlight can be used to explain both seasonal and latitudinal differences in temperature. Along the way, this activity helps students visualize the true dimensions of the solar system and the various objects within it. This seemingly unrelated topic is included in this activity because an accurate perception of the scale of the solar system helps students understand that (1) Earth's equator is not significantly closer to the sun than are its poles, and (2) all sunrays intercepted by Earth are essentially parallel to each other, whether they strike the equatorial or polar regions -- a concept that is essential for understanding how and why the angle of incident sunlight varies systematically with latitude and season. 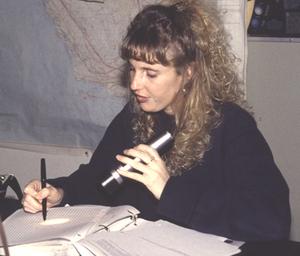 In this activity, students confront their misconceptions about seasonal and latitudinal temperature variations, come to understand the true causes of these phenomena, practice using simple physical models to solve problems, and develop their 3-D visualization skills. The specific content learning objectives are:

This activity has been extensively tested, revised and retested for more than 15 years in the Concepts in Earth and Space Sciences course for future teachers at California State University, Chico. It should work well in Earth science and astronomy courses from middle school to college level. Because this activity is designed to guide students toward discovery of the concepts, it works best if complete it before reading any explanations of or receiving any direct instruction about the causes of the seasons or why it is warmer at the equator than it is at the poles.

General Comments: This activity can be completed in two hours if students give it a superficial treatment, but three to four hours are required for an in-depth exploration, including the confrontation of any misconceptions and the construction of a full understanding of the concepts.

As students work through these activities, encourage them to engage in lively conversations, continually brainstorming, questioning, and checking for consistency. In my experience, students are often inconsistent -- gently call them on this. For example, one student adamantly insisted -- despite the protestations of her team members -- that the equator was not significantly closer to the sun than were the poles. Yet, she then attributed the temperature differences between the equator and the poles to differences in their distances to the sun. I pointed out that she was contradicting herself, which caused her to engage in some deep thinking which culminated in an "Aha!" moment that she absolutely delighted in.

Notes on Lab Activity #1: Scale Model of the Solar System

Notes on Lab Activity #2: Why is it Warmer at the Equator Than it is at the Poles?

Notes on Lab Activity on the Causes of the Seasons

At the end of this activity, I typically assess student learning by having student groups present their answers to the rest of the class. I divide the different parts of this activity among the student groups, assigning each group to prepare illustrations and orally present their part to the rest of the class. Each presentation is then followed by a whole-class discussion.

I assign this Homework Assignment on the Causes of the Seasons (Microsoft Word 58kB Sep5 09) as assessment, but also as a way for students to consolidate the understandings that they have built during the guided-discovery activity. Students often benefit from a formal traditional presentation of concepts that they have previously struggled to grasp while working through a hands-on guided-discovery activity. When the traditional presentation follows guided discovery, it can be very meaningful, building students' confidence in their freshly hatched ideas and organizing their discoveries into a logical and elegant construct. Without some kind of traditional presentation of the concepts, students are often so unsure of themselves that they feel lost. Yet, in my classes, students rarely complete (let alone comprehend the material presented in) a "Read Chapter 3" type of assignment, even when it's followed by a quiz. But the vast majority of students will complete an assignment like the one presented here, which requires students to extract and record specific information from the textbook. Higher-order thinking it's not, but it is a helpful incentive to encourage students to open their textbooks and actually comprehend what is written there.

I give students practice answering questions in low-stakes ConcepTests (using clickers) or on-line practice quizzes before asking such questions on high-stakes exams. Here are some sample questions:

Why is it hotter at the equator than it is at the poles?

a. Because the equator is closer to the sun.

b. Because the sun's rays travel through more atmosphere at the equator.

c. Because the sun's energy is more spread out at the equator.

d. Because the sun's rays hit the earth's surface at a higher angle at the equator.

e. Because the sun is always directly overhead at the equator.

If the Earth's axis only had a 5° tilt, how would the seasons in Chico be different from how they are now?

a. The seasons would be shorter.

b. The transitions between seasons would be more abrupt.

c. The contrast in temperature between summer and winter wouldn't be as great.

e. All of the above.

On exams, I ask students open-ended essay questions (Microsoft Word 4.3MB Sep5 09) that require them to synthesize the concepts gained from this lab activity.


This teacher's guide features many engaging hands-on activities. Although it was written for teachers of grades 6-8, it is also useful for high school teachers and college professors.

This video was produced by the folks at the Private Universe Project who studied common misconceptions about the seasons and the phases of the moon. To view this video, scroll to the bottom of the page and click on the "VoD" icon. You will have to first register with the Annenburg Media Center (learner.org) to see the video, but registration is free and it grants you access to many other videos for educators.


An extension of this activity that helps students deepen their understanding of the concepts is to model the path of the sun across the sky at different latitudes and at different times of the year. An excellent inexpensive solar motion demonstrator kit is available from the Astronomical Society of the Pacific (www.astrosociety.org). I have written a worksheet for students to complete (Microsoft Word 63kB Sep5 09) as they work with these solar motion demonstrators.


Go back to the Guided Discovery Problems examples page.