Who are the English Language Learners in our Classes? 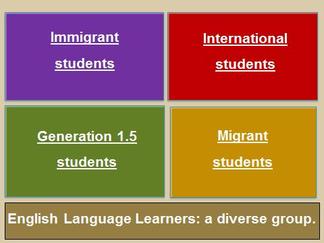 International students typically come to the United States on a special visa to pursue advanced studies. They are usually educated and literate in their first language (and possibly other languages) and are learning English as a second or third language. However, depending upon circumstances in their home country or region, students may not have had an opportunity to interact with native or near-native speakers of English. As a result, they may have relied heavily on a pedagogical approach known as the Grammar-Translation Method in which class time and course assignments focus on a detailed examination of written texts and the translation of those texts into the student's native language. As primarily visual, text-based learners, many international students are "book learning" strong with highly developed reading skills and extensive grammatical knowledge of English. However, they may need help with developing their auditory skills (for comprehension and understanding of class lectures) as well as their oral skills (in order to fully participate in class discussions, group tasks, and oral presentations) (Louie, 2009).

Immigrant students have usually relocated to the United States on a more long-term basis than international students. The two main subsets of immigrant students include: (1) those who have come willingly to the U.S., perhaps seeking greater economic opportunities, and (2) those who have been forced to leave their homelands for political or religious reasons. Students in this second group may have experienced substantial hardship, enduring war-like conditions in their own country, stressful time spent in refugee camps, and may be separated from family members and loved ones. The term "Immigrant students" refers to both individuals from highly educated families with significant educational experience as well as others who may have had sporadic or interrupted schooling, resulting in critical gaps in their educational knowledge base (Fix and Passel, 2003).

Migrant students often come from families in the agricultural and fishery industries and have moved frequently, often across state lines, following the availability of seasonal work. Migrant families exist in nearly every U.S. state, but especially high populations can be found in four states: California, Oregon, Texas, and Washington. Although students from migrant families entering college will have graduated from high school, there may be significant gaps in some of their academic knowledge areas and skills (Lundy-Ponce, 2010).

"Most English language learners are not immigrants. While some ELLs are newcomers to this nation, the majority of English learners are US-born children of immigrants. More than 75 percent of ELLs in grades K-5 are second- or third-generation Americans, and 57% of middle and high school ELLs were born in the United States" (Grantmakers for Education, 2013).

Generation 1.5 students are non-native speakers of English who were born in the U.S. or born abroad but largely educated in the U.S. (Roberge, 2009). Students in this subset of ELLs grew up in homes where a language other than English was dominant and have graduated from high schools in the U.S.. The term "Generation 1.5 students" is applied broadly to ELLs who share linguistic and cultural traits with both first and second generation immigrants. Generation 1.5 students share a set of characteristics and have educational needs that differ from other ELL student populations. They have been schooled completely or predominantly in the U.S. and thus are familiar with U.S. culture and the U.S. educational system. Generation 1.5 students are often the first in their families to complete high school or to attend college. Generation 1.5 students have acquired English mainly through social interaction and the mass media. They are primarily "auditory" learners who understand spoken English very well and are native or nearly-native in their conversational speaking skills. However, they may or may not be literate in their first language, and many may need help with reading and writing in English - particularly academic English (Roberge, Siegal, and Harklau, 2009).

Lundy-Ponce, G. (2010). Migrant Students: What We Need to Know to Help Them Succeed.