What is X-ray Computed Tomography (CT)

X-ray Computed Tomography (CT) is a nondestructive technique for visualizing interior features within solid objects, and for obtaining digital information on their 3-D geometries and properties.

3D reconstruction of skull of Herrerasaurus, with cutaway showing brain case. Sample is 32 cm long. Details
A CT image is typically called a slice, as it corresponds to what the object being scanned would look like if it were sliced open along a plane. An even better analogy is a slice from a loaf of bread, because just as a slice of bread has a thickness, a CT slice corresponds to a certain thickness of the object being scanned. So, while a typical digital image is composed of pixels (picture elements), a CT slice image is composed of voxels (volume elements). Taking the analogy one step further, just as a loaf of bread can be reconstituted by stacking all of its slices, a complete volumetric representation of an object is obtained by acquiring a contiguous set of CT slices.

The gray levels in a CT slice image correspond to X-ray attenuation, which reflects the proportion of X-rays scattered or absorbed as they pass through each voxel. X-ray attenuation is primarily a function of X-ray energy and the density and composition of the material being imaged.

Tomographic imaging consists of directing X-rays at an object from multiple orientations and measuring the decrease in intensity along a series of linear paths. This decrease is characterized by Beer's Law, which describes intensity reduction as a function of X-ray energy, path length, and material linear attenuation coefficient. A specialized algorithm is then used to reconstruct the distribution of X-ray attenuation in the volume being imaged.

Hide
The simplest form of Beer's Law for a monochromatic X-ray beam through a homogeneous material is:

where I0 and I are the initial and final X-ray intensity, µ is the material's linear attenuation coefficient (units 1/length) and x is the length of the X-ray path. If there are multiple materials, the equation becomes:

where each increment i reflects a single material with attenuation coefficient µi with linear extent xi. In a well-calibrated system using a monochromatic X-ray source (i.e. synchrotron or gamma-ray emitter) this equation can be solved directly. If a polychromatic X-ray source is used, to take into account the fact that the attenuation coefficient is a strong function of X-ray energy, the complete solution would require solving the equation over the range of the X-ray energy (E) spectrum utilized:

However, such a calculation is usually problematic, as most reconstruction strategies solve for a single µ value at each spatial position. In such cases, µ is taken as an effective linear attenuation coefficient, rather than an absolute. This complicates absolute calibration, as effective attenuation is a function of both the X-ray spectrum and the properties of the scan object. It also leads to beam-hardening artifacts: changes in image gray levels caused by preferential attenuation of low-energy X-rays.

Hide
The dominant physical processes responsible for X-ray attenuation for most laboratory X-ray sources are photoelectric absorption and Compton scattering. Photoelectric absorption occurs when the total energy of an incoming X-ray photon is transferred to an inner electron, causing the electron to be ejected. In Compton scattering, the incoming photon interacts with an outer electron, ejecting the electron and losing only a part of its own energy, after which it is deflected in a different direction.

In general for geological materials, the photoelectric effect is the dominant attenuation mechanism at low X-ray energies, up to approximately 100-150 keV, after which Compton scatter predominates. The practical importance of this transition is that the photoelectric effect is proportional to atomic number Z4-5, whereas Compton scattering is proportional only to Z, or, to first order, mass density. As a result, low-energy X-rays are more sensitive to differences in composition than high-energy ones, but are also attenuated much more quickly, limiting the thickness of high-density material that can be penetrated and imaged with them. 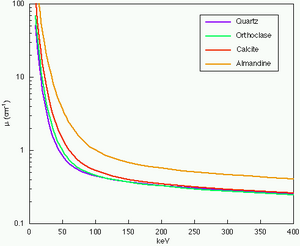 The figure on the right shows linear attenuation coefficients as a function of energy for four minerals: quartz, orthoclase, calcite, and almandine garnet. Quartz and orthoclase are very similar in mass density (2.65 g/cm3 vs. 2.59 g/cm3), but at low energy their attenuation coefficients are different because of the presence of relatively high-Z potassium in the feldspar. With rising X-ray energy, their attenuation coefficients converge, and at approximately 125 keV they cross; above ~125 keV quartz is slightly more attenuating, owing to its higher density. Thus, these two minerals can be differentiated in CT imagery if the mean X-ray energy used is low enough, but at higher energies they are nearly indistinguishable. Calcite, though only slightly more dense (2.71 g/cm3) than quartz and orthoclase, is substantially more attenuating at low energy, owing to the presence of calcium. Here the divergence with quartz persists to slightly higher energies, indicating that it should be possible to distinguish the two even in higher-energy scans. High-density, high-Z phases such as almandine are distinguishable at all energies from the other rock-forming minerals examined here.

Hide
There are a number of methods by which the X-ray attenuation data can be converted into an image, some proprietary. The most frequent approach is called "filtered backprojection," in which the linear data acquired at each angular orientation are convolved with a specially designed filter and then backprojected across a pixel field at the same angle. 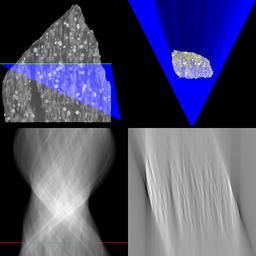 This principle is illustrated in the image at right and an animation that can be viewed by clicking on the link below. A hand sample of garnet-biotite-kyanite schist (top left) is rotated, and its midsection is imaged with a planar fan beam (blue). The attenuation of X-rays by the sample as it rotates is shown in the upper right; the more attenuation there is along a beam path leading from the point source (bottom) to the linear detector (top), the fewer X-rays reach the detector. The data collected at each angle are compiled in the bottom right. In this image the horizontal axis corresponds to detector channel, and the vertical axis corresponds to rotation angle (or time), and brightness corresponds to the extent of X-ray attenuation. The resulting image is called a sinogram, as any point in the original object corresponds to a sine curve. After data acquisition is complete, reconstruction begins. Each row of the sinogram is first convolved with a filter, and projected across the pixel matrix (bottom right) along the angle at which it was acquired. Once all angles have been processed, the image is complete.
Animation of CT reconstruction ( PRIVATE FILE 9.1MB Mar30 07)

X-ray Computed Tomography (CT) Instrumentation - How Does It Work?

The elements of X-ray tomography are an X-ray source, a series of detectors that measure X-ray intensity attenuation along multiple beam paths, and a rotational geometry with respect to the object being imaged. Different configurations of these components can be used to create CT scanners optimized for imaging objects of various sizes and compositions.

The great majority of CT systems use X-ray tubes, although tomography can also be done using a synchrotron or gamma-ray emitter as a monochromatic X-ray source. Important tube characteristics are the target material and peak X-ray energy, which determine the X-ray spectrum that is generated; current, which determines X-ray intensity; and the focal spot size, which impacts spatial resolution.

Most CT X-ray detectors utilize scintillators. Important parameters are scintillator material, size and geometry, and the means by which scintillation events are detected and counted. In general, smaller detectors provide better image resolution, but reduced count rates because of their reduced area compared to larger ones. To compensate, longer acquisition times are used to reduce noise levels. Common scintillation materials are cesium iodide, gadolinium oxysulfide, and sodium metatungstate. 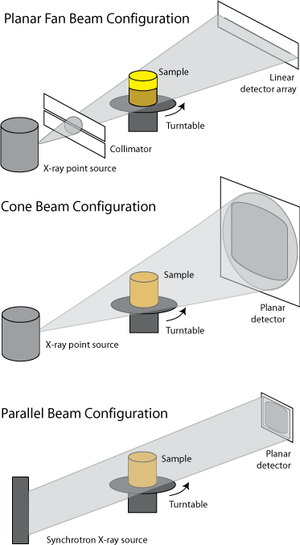 The diagram at right illustrates some of the most common configurations for CT scanners. In planar beam scanning, X-rays are collimated and measured using a linear detector array. Typically, slice thickness is determined by the aperture of the linear array. Collimation is necessary to reduce the influence of X-ray scatter, which results in spurious additional X-rays reaching the detector from locations not along the source-detector path. Linear arrays can generally be configured to be more efficient than planar ones, but have the drawback that they only acquire data for one slice image at a time.

In cone-beam scanning, the linear array is replaced by a planar detector, and the beam is no longer collimated. Data for an entire object, or a considerable thickness of it, can be acquired in a single rotation. The data are reconstructed into images using a cone-beam algorithm. In general, cone-beam data are subject to some blurring and distortion the further one goes from the central plane that would correspond to single-slice acquisition. They are also more subject to artifacts stemming from scattering if high-energy X-rays are utilized. However, the advantage of obtaining data for hundreds or thousands of slices at a time is considerable, as more acquisition time can be spent at each turntable position, decreasing image noise.

Parallel-beam scanning is done using a specially configured synchrotron beam line as the X-ray source. In this case, volumetric data are acquired and there is no distortion. However, the object size is limited by the width of the X-ray beam; depending on beam line configuration, objects up to 6 cm in diameter may be imaged. Synchrotron radiation generally has very high intensity, allowing data to be acquired quickly, but the X-rays are generally low-energy (< 35 keV), which can preclude imaging samples with extensive high-Z materials.

Other variants are multiple-slice acquisition, in which a planar detector is used but data are processed with a fan-beam reconstruction algorithm, and spiral scanning, in which sample elevation is changed during data acquisition, potentially reducing cone-beam artifacts.

CT data have been applied to virtually every geological discipline, and new applications are being continually discovered. Successful applications to date include: 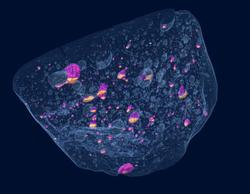 The only preparation necessary for CT scanning is to ensure that the object fits inside the field of view and that it does not move during the scan. Because the full scan field for CT is a cylinder (i.e., a stack of circular fields of view), the most efficient geometry to scan is also a cylinder. Thus, when possible, it is often advantageous to have the object take on a cylindrical geometry, either by using a coring drill to obtain a cylindrical sample or by packing the object in a cylindrical container with either X-ray-transparent filler or with material of similar attenuation characteristics.

CT data generally take the form of a sequence of image files, which can be visualized and analyzed using a wide variety of 2D and 3D-based image processing tools. The gray-level data values in CT images are generically called CT numbers. However, CT numbers typically vary from scanner to scanner, and even scan to scan.

The two standard modes of 3D visualization are volume rendering and isosurfacing. Volume rendering consists of mapping each CT value to a color and an opacity. Thus, some phases can be rendered transparent, allowing internal features to be revealed. Isosurfacing involves defining 3D contour surfaces that delineate boundaries between CT numbers, much as contour lines separate elevations values on a topo map.

Because CT data sets typically comprise hundreds of images and thousands of megabytes, they are not amenable to traditional publishing. However, CT data and visualizations are increasingly being served over the world wide web. An example is the Library of Digital Morphology (more info) website.

For more information about X-ray Computed Tomography (CT) follow the links below.