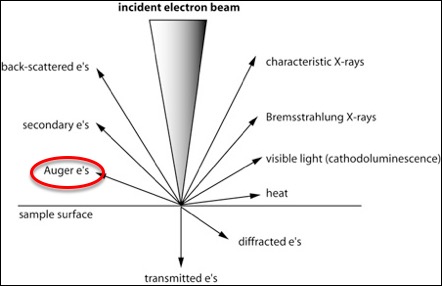 Figure 1. Types of interactions between electrons and a sample.

Hide
Depending on the incident energy of the electron beam, a variety of electrons(auger, secondary and back-scattered), X-rays (characteristic and Bremsstrahlung), light (cathodoluminescence)and heat (phonons) are emitted. Several of these interactions are used for imaging, semi-quantitative analysis and/or quantitation analysis.

Electrons accelerated onto a material result in a number of interactions with the atoms of the target sample. Accelerated electrons can pass through the sample without interaction, undergo elastic scattering and can be inelastically scattered (Figure 1). Elastic and inelastic scattering result in a number of signals that are used for imaging, quantitative and semi-quantitative information of the target sample and generation of an X-ray source. Typical signals used for imaging include secondary electrons (SE), backscattered electrons (BSE), cathodoluminescence (CL), auger electrons and characteristic X-rays. Quantitative and semiquantitative analyses of materials as well as element mapping typically utilize characteristic X-rays. Bremsstrahlung (continuum) radiation is a continuous spectrum of X-rays from zero to the energy of the electron beam, and forms a background in which characteristic X-ray must be considered. Further, X-rays generated from a specific target material are used as the roughly fixed-wavelength energy source for X-ray diffraction (XRD) and X-ray fluorescence (XRF) investigations.

Where an electron beam impinges on a sample, electron scattering and photon- and X-ray-production develops in a volume (the electron interaction volume) that is dependent on several factors (Figure 2). These include: 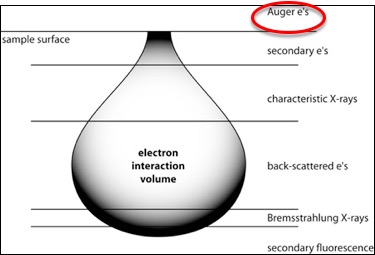 Hide
Each of the electron, X-ray and light emissions generated after the impingement of a high-energy electron beam, develops at different depths (volumes) within the sample. In turn, the volume of generation of the emitted energy controls the spatial resolution of the signal.

Each of the signals used for imaging or X-ray generation is generated from different electron interaction volumes and, in turn, each of the signals has different imaging or analytical resolution. Auger and Secondary images have the best imaging resolution, being generated in the smallest volume near the surface of the sample. Backscattered electrons are generated over a larger volume resulting in images of intermediate resolution. Cathodoluminescence is generated over the largest volume, even larger than Bremsstrahlung radiation, resulting in images with the poorest resolution.